Thanks to a collaborative partnership, the Alaska state ferry system now serves as a platform for ocean acidification research on its weekly run between Washington State and Alaska.

A surface seawater monitoring system has been installed on the M/V Columbia to study ocean acidification, or OA, which is caused by an increase in carbon dioxide (CO2) in the water. The Columbia data collection is part of an international effort that began in 2014 to understand the impact of OA along the British Columbia and Alaska coasts. 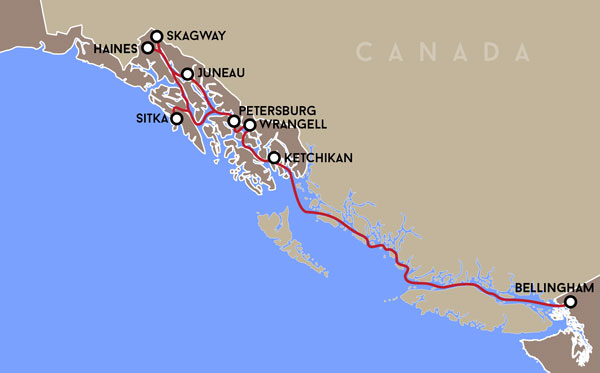 Oceans absorb about 25 percent of the increasing carbon dioxide released into the atmosphere by humans, now roughly 7 million tons of CO2 every day.  As a consequence, seawater is becoming more acidic. Ocean acidification could impact all commercial, sport, and subsistence fisheries and wildlife management in Canada and Alaska as well as the lower 48.

“If this acidification continues to march up the coast, it has the potential to affect anything with shells,” says Southeast Alaska oyster grower John Kiser.  He calls the oceans “a big CO2 sink, then you get the carbonic acid and that effects anything with calcium and carbonates in it,” including clams, oysters, crabs, corals, and plankton. Shellfish larvae cannot form their shells fast enough to survive.

For the past eight years Kiser has been farming oysters on Moseman Island in Clarence Strait, and used to buy seed oysters from Washington state growers, but fewer of the young oysters are surviving.

“They’ve had such a problem that they have to use most of the seed for themselves,” he says. Now Alaska oyster growers buy seed from Hawaii.

Kiser says the data collected by the instruments on the Columbia will be particularly important to Alaskans. “If the oceans become more acidic,” he says, “this will affect the way we’re living up here.” More on OA in Alaska.

How Does the Monitoring System Work? 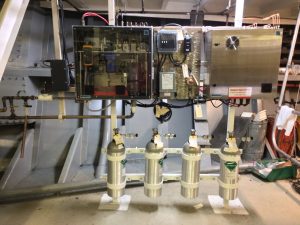 Seawater is pumped up to a monitoring system on the car deck of the Columbia. The data is sent in real-time to researchers and is also available below.

The Alaska Marine Highway System provides an ideal research platform to study ocean acidification. Every three minutes, seawater temperature will be measured as it enters the ship through a bow thruster port, about six feet below the sea surface. Then the seawater is pumped up to a monitoring system on the Columbia car deck, where sensors will again record temperature along with dissolved oxygen, salt content, and CO2.

Oceanographer Wiley Evans helped install the instruments on the Columbia.

“There’s no manipulation of the seawater, these are all direct measurements that don’t involve changes in the seawater character in any way,” he says.

By continuously tracking the variables, scientists like Evans can study seasonal changes in ocean chemistry, how it varies from place to place, and what drives the changes. 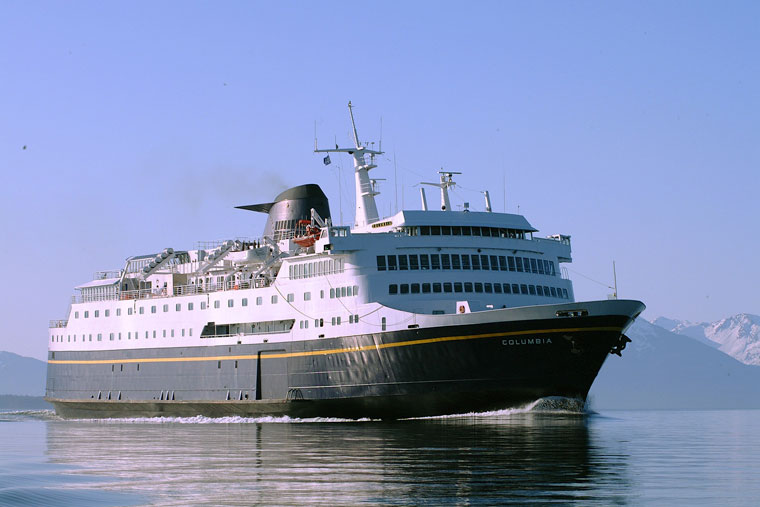 Evans manages ocean acidification research for the Hakai Institute in British Columbia, Canada. The Hakai Institute, Alaska Coastal Rainforest Center at the University of Alaska Southeast, the Alaska Ocean Observing System, NOAA Pacific Marine Environmental Laboratory, and the Alaska Department of Transportation and Public Facilities are collaborating to make the Columbia monitoring system possible.  The Columbia sensors will link with a Southeast Alaska and British Columbia near-shore ocean acidification network, comprised of several on-shore observatory stations and moorings with carbonate-sensing instruments.  The data will be available on the Alaska Ocean Acidification Network.

Evans is scheduled to be on the Columbia in October on its roundtrip between Bellingham and Skagway. He plans to ride along twice each season, with frequent visits to maintain the equipment while the ferry is in Bellingham on Fridays. Evans hopes data collection will continue for more than five years.

“Ocean acidification is a moving target. It’s the trajectory of our coastal waters being forced by increasing atmospheric CO2 content and in order to capture that we need to make measurements over a long period of time. So that’s the goal with this platform,” he says. “It’s not just one year, it’s not just three, we’re really trying to make sure that this is a long-term commitment.”

Chief Mate Jim Annicelli will be on the Columbia this season as it sails the Inside Passage. He’s been with the Alaska Marine Highway System for nine years, but has worked for more than 40 years in the maritime industry around the globe, including on container vessels that collect ocean acidification data for NOAA between the Eastern Seaboard and South Africa. 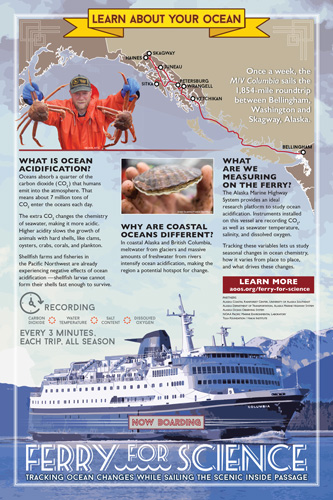 Wherever the research takes place, Annicelli says, it has far reaching implications. Once a week, the Columbia will sail the 1,854-mile roundtrip between Bellingham to Skagway, the longest ferry run in North America.

“Ocean acidification testing is something that can only be done through a device and a ship that transits these waters between Canada and Alaska over thousands of miles and on a regular schedule,” Annicelli says.
“When you get really right down to it, we have to be paying attention to our environment,” he says. “There’s a lot at stake.”

Posters explaining the project will greet passengers on the Columbia and at ferry terminals in communities along the way. The Columbia’s summer season is scheduled to begin in Bellingham in October. Download poster (4MB)