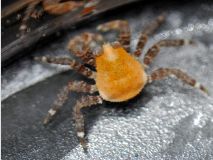 Juvenile blue king crab are among the species being studied in the NOAA Kodiak Lab. (AFSC photo)

Why are crab susceptible to OA?

Ocean acidification is caused by an increase in carbon dioxide in seawater that sets off a cascade of effects in the ocean chemistry. For crabs, ocean acidification may be important because of the reduction in pH and because of the lower availability of calcium carbonate. Lower (more acidic) pH may cause physiological stress because pH affects how molecules move across the gills. Gills in a crab regulate ions (salt), excrete ammonia, and of course move oxygen from the seawater into the crab hemolymph (blood). The lower pH also reduces the saturation state of calcium carbonate making it more difficult for a crab to build a shell as it molts (grows).

What questions are we trying to answer? 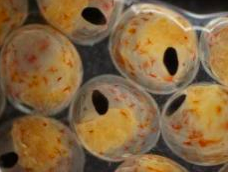 We are also trying to understand the mechanism of how ocean acidification leads to lower survival: How are cells in the hemolymph affected? Does the shell calcification change? What is the genetic response to decreased pH?

Finally we would like to know how commercial fisheries and local communities in Alaska may be affected by ocean acidification: How will decreased survival at different life stages affect the crab stocks in the Bering Sea? What will the effect be on commercial fishing profits?

How can we test our hypotheses in the lab or in the field? 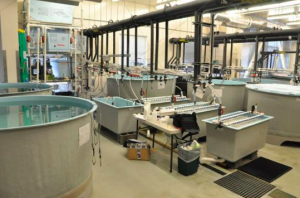 Laboratory studies allow us to control environmental variables such as pH, alkalinity, and temperature. This allows us to see how an organism is directly affected by living in seawater that has already been acidified. This also allows us to vary the crabs’ exposure to corrosive seawater (because the ocean is not static). Finally laboratory studies allow us to change multiple variables at the same time to determine the relative effect of ocean acidification to other factors liked increased temperature.

What have we learned so far? 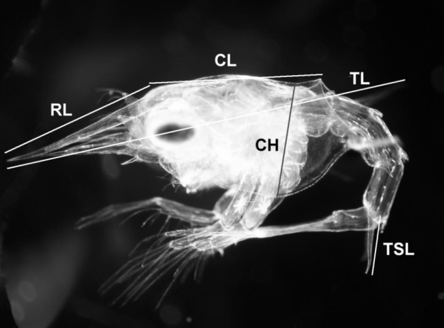 As part of the study, scientists make morphological measurements on a larval crab to track growth rates. (AFSC photo)

Studies have been conducted on red king crab, blue king crab, southern Tanner crab, and snow crab. The results varied among species and among life stages. In general, however, crab survival went down at every life history stage as they were exposed to lower pH water.

The effects were particularly noticeable with southern Tanner crab. When adult crabs were exposed to lower pH water during oocyte development, embryos failed to hatch, and larval survival decreased. Juvenile growth was slower, calcification was lower, and survival was lower. In adults, changes in hemocyte (bloodcell) pH suggested that the crab had to expend more energy to maintain their immune systems.

Finally, stock assessment and bioeconomic models predicted that the low survival rate of juveniles would lead to fewer adult crab and a >50% decrease in catch and profits within 20 years after ocean acidification reaches a pH of 7.5 in the Bering Sea. 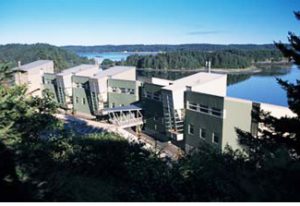 Thank you to the Alaska Fisheries Science Center for providing the information for this page.