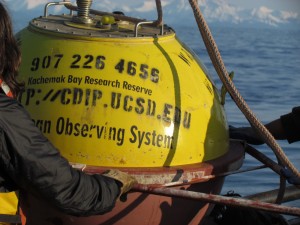 Kris Holderied of the NOAA Kasitsna Bay Lab stands with the buoy aboard the Pandalus, moments before deployment on the evening of May 2nd. Photo by Angie Doroff.

Boaters in the Lower Cook Inlet region can once again track sea state conditions before venturing out on the water. First deployed in May 2011, a wave buoy owned by the Alaska Ocean Observing System provided five months of data to the Homer boating community before breaking free from its tether.  Late on the night of Wednesday May 2nd, a team led by Captain Mark Hottman of the Pandalus redeployed the buoy 7 miles west of Anchor Point.

The 400-pound yellow buoy transmits real-time information about wave height, and direction, as well as sea surface temperature. It is also equipped with a light that flashes five times in a 20-second cycle (five flashes 2 seconds apart, followed by a 12-second pause).

An unknown event set the buoy free in October, but could have involved fishing net or other floating debris.  Fortunately, the buoy’s signal continued to transmit, allowing Kachemak Bay Research Reserve Manager Terry Thompson to track it down by boat.  When found, the buoy was traveling North at almost 2.5 knots driven by the tides. “Tracking a very small buoy gives you a sense of the tremendous currents and varying sea-state in lower Cook Inlet” commented Thompson.

The fishing community, one of the primary users of the buoy, has been excited to have it back in the water.  “That is the first thing I check in the morning,” said Bob Howard, a retired charter operator and Homer resident.  “It is very very important to people.  Anyone who fishes within 30 miles of the area is interested in that buoy.  We can look at winds, but judging waves from wind involves speculation. Real time wave height is the key information.”

Reestablishing the buoy exemplifies collaboration among the Alaska ocean observing community. The buoy is part of the national Coastal Data Information Program (CDIP) sponsored by the U.S. Army Corps of Engineers. It was built by a Dutch company, and returned to the Netherlands by barge this spring for recalibration. Once back in Alaska, staff from the Kachemak Bay Research Reserve helped prep and the Alaska Department of Fish and Game’s research vessel redeployed the buoy.  AOOS is the owner and manager of the buoy.

“It’s a key component of AOOS’ initiative to improve ocean monitoring in Cook Inlet to meet the needs of the inlet’s many users, including commercial and recreational fishermen, shipping, resource managers, and the oil and gas industry and oil spill responders, said Molly McCammon, Executive Director of AOOS, the owner and manager of the buoy.

Information from the buoy will be used to assist a wide array of marine operations. Cook Inlet receives high vessel traffic, as 95% of Alaska’s goods arrive by barge through the inlet on the way to the Port of Anchorage.  Additionally, an active sport fishing fleet departing from Homer and Anchor Point has desired a buoy for many years. Circulation patterns are complicated in the inlet, which also experiences high winds, seasonal sea ice, and tides up to 36 feet in places.

AOOS would like to extend sincere thanks to Terry Thompson and Angie Doroff from the Kachemak Bay Research Reserve, Kris Holderied and Dominic Hondolero from NOAA’s Kasitsna Bay Lab, and Captain Mark Hottman for a smooth deployment.

The buoy is the first of at least four that are considered key to implementing the National Waves Plan in Alaska. In 2012 AOOS is also implementing other components of an ocean observing system in Cook Inlet, including a new weather station at the McNeil River bear viewing site, monthly oceanographic surveys in Kachemak Bay, and enhanced wind forecasts.