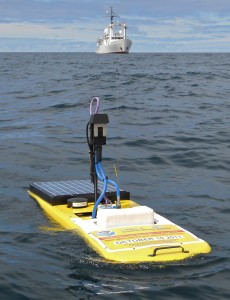 A remote-controlled glider, similar to the one shown here, is measuring ocean acidification in Prince William Sound from May to September. Photo credit: Richard Feely, NOAA/PMEL

This summer, two surface wave gliders, resembling yellow surfboards, are cruising around Prince William Sound in the northern Gulf of Alaska as part of a five-month monitoring program to measure ocean acidification. This video by Wiley Evans of NOAA captures the deployment of one of the gliders and demonstrates how it moves through the water. The project aims to track glacial melt, which has an amplifying effect on ocean acidification in this important and sensitive marine ecosystem.