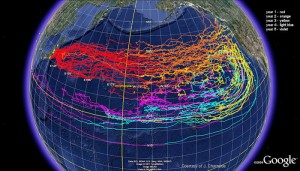 Marine debris from the March 2011 tsunami in Japan has caused concerns about impacts to Alaska and the west coast.  The NOAA website on Japan tsunami marine debris provides updated information, FAQ, and short videos.

1) How much debris is there?
The Government of Japan estimates that the tsunami swept roughly 5 million tons of debris into the Pacific Ocean. Of this 5 million tons, they estimate that roughly 70% sank nearshore, leaving 30% or roughly 1.6 – 1.7 million tons of debris floating off the coast. That aligns with previous NOAA data and experience from similar events that shows that the majority of heavier debris is likely to sink in the nearshore area.

Once in the ocean, remaining debris began to disperse with ocean currents and weather, generally moving east. In the days after the tsunami, the debris was concentrated enough to be seen by satellites, but by a few weeks later, the debris had spread out to the point that the lower resolution satellite sensors couldn't detect it.

Since then, NOAA has worked with partners to collect and analyze high resolution satellite imagery of over 300,000 square kilometers of the Pacific looking for debris, with none detected to date. Because that still represents only a small fraction of the area where debris may be, we are also working with fishing fleets, the shipping industry, as well as USCG and NOAA vessels to report in any at-sea sightings of debris (more on that later in the email)

The sightings NOAA has received confirm that debris is not in fields or islands, but scattered over a large area of the North Pacific.

2) When will the debris arrive in Alaska?
Many variables affect where the debris will go and when. Objects that sit low in the water – like lumber or fishing line/nets – will tend to follow currents and move more slowly, while objects that sit high in the water – like empty canisters or Styrofoam floats – will tend to follow winds and move more quickly (this is roughly defined as the “windage of an object).  A new modeling effort that uses past winds and currents to explore the path of more wind-driven debris shows that some of the fastest moving debris objects may have reached the West Coast of North America (including parts of Alaska) in the winter of 2011-2012. The majority of the debris objects in the model scenario remain at-sea, north and east of Hawaii.

These latest model results are attached here.  Because the model uses past winds and currents, it shows where debris may be now, but does not predict where debris will be in the future – It's a “hindcast” rather than a “forecast” model. NOAA will be updating these model results regularly.

3) What type of debris is out there?
The tsunami impacted an area with varied infrastructure, so what was washed to sea is expected to be a wide range of items – household and consumer goods, construction and industrial materials, fishing and maritime equipment, etc.  The exact composition is unknown, and likely to vary over time and distance as the debris weathers. This makes it difficult to differentiate “tsunami debris” from the debris that unfortunately hits Alaskan (and other) shorelines all the time.

4) Is the debris radioactive?
Consensus of scientists across the agencies NOAA has consulted with is that debris contamination is HIGHLY unlikely. This is based on several reasons, primarily that the debris would have been too far from the Fukushima reactor to have been in contact with radiation, both because the radiation leaks began after debris would have begun moving off the coast, and because the tsunami impact area included areas far from the reactor site. Going along with these data, monitoring stations as close as 30 km away from the reactor site itself have shown that seawater met radiation safety levels for human consumption.

5) What should I do if I see potential tsunami-related debris?
NOAA is asking that people report significant sightings of debris that could be linked to the Japan tsunami to an email address created for the purpose – disasterdebris@noaa.gov, including as accurate a description as possible of what you saw, and where you saw it, as well as the potential linkage to the tsunami. Including a photo of the object, and especially of any identifying or distinguishing marks is very helpful.

NOAA is also looking for partners to participate in establishing monitoring sites, using a standardized protocol for monthly data collection.  This protocol will allow us to compare data collected across the Pacific to detect trends and changes in debris type and quantity.

NOAA is and will be continuing to learn more, and encourages people to stay informed Visit  NOAA's main marine debris page or a Japanese tsunami-specific.