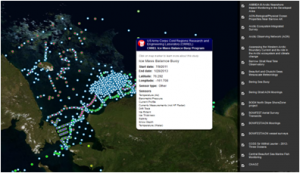 AOOS has hosted the Research Assets Map since 2010, providing location and metadata information for coastal and marine sampling efforts.

The AOOS Research Assets Map is scheduled to transition into the AOOS Ocean Data Explorer (HTML5) format over the next year. The existing map was built on a programming platform called Flex which will unfortunately be discontinued by Google at the end of the month. We will be brainstorming a “next generation” asset map this winter, but in the meantime an interim map will be in place for researchers through the end of the open water season.  The interim map will have an interface similar to the AOOS Ocean Data Explorer, and will allow users to query by parameter, study type, and dates.  However, it will only include point data (mostly in-situ instruments) and not ship transects, flight lines, or polygon sampling. The interim map will replace the current map on Sept 1st.  All information from the current map will be archived so it can be projected again in the future.

We hope this change does not inconvenience your research.  Please contact Darcy at dugan@aoos.org if you have questions, or if you are interested in being part of the conversation later this year to develop the next generation map. We will be looking for user input to make sure the next iteration is user-friendly and meets researcher needs.