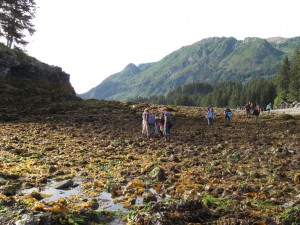 From July 29 – Aug 2nd, formal and informal educators from around the country (including 10 from Alaska) met in Anchorage and traveled to NOAA’s remote Kasitsna Bay Lab participate in Alaska’s first EARTH Workshop.  EARTH uses near-real-time data from ocean observatories to design and test outreach with the internet as an interface to scientists, teachers, students, and the public.  The workshop was co-sponsored by the Monterrey Bay Aquarium Research Institute (MBARI), the North Pacific Research Board (NPRB), COSEE Alaska, and AOOS.

Among the presenters were Dr. Jeremy Mathis, head of UAF’s Ocean Acidification Research Center and the Alaska expert on ocean acidification.  Russ Hopcroft, also of UAF, presented on biological oceanography and spring algal blooms.  View the presentations by Jeremy, Russ, and others.

AOOS got a chance to test out its real-time data portal with educators and got an enthusiastic response. The educators found the portal easy to use and immediately began incorporating AOOS resources into their lesson plans.  New curriculum from the workshop can be found under “Tuesday” in the agenda.  AOOS-specific lesson plans will be posted on the AOOS outreach page shortly.

AOOS would like to give a special thanks to George Matsumoto who facilitated the workshop, as well as other diligent organizers including Marilyn Sigman, Nora Deans, and Kris Holderied.