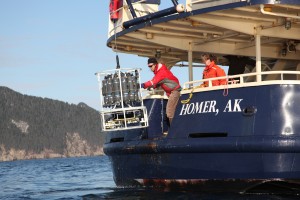 Researchers pull in a CTD - a highly calibrated instrument to capture temperature and salinity values at different depths in the water column.

Warmer than normal waters in the Gulf of Alaska surprised scientists who have studied the waters over the Alaskan shelf south of Seward for the past 17 years. During a September cruise, the team found the upper 300 feet to be 1 to 5 degrees warmer than the September average of 55-57°F. They also found warm water species of plankton, a vital food for fish and other marine line, farther north than usual.

“It was like working in a bath tub out there,” said chief scientist Russell Hopcroft, a professor at the University of Alaska Fairbanks School of Fisheries and Ocean Sciences, “except for the high winds and 12-foot swell. This year was more than 1°F warmer than any other year we have studied.”

The Seward Line transect starts near the mouth of Resurrection Bay and extends into the Gulf of Alaska, crossing the Alaska coastal current.

According to Hopcroft, warmer temperatures along the transect – known as the “Seward Line” – are partly a result of an unusual winter that left the Gulf’s offshore waters warmer than normal. A warm-water anomaly in the tropical Pacific Ocean may have added to the rise in temperatures.

Other research teams in Alaska this summer have found warmer waters from southeastern Alaska through the Bering Sea, according to Hopcroft. Rising temperatures can have big consequences for marine life accustomed to colder year-round temperatures. Some coldwater fish, crab, plankton and other species experience challenges when water is too warm. Other species grow more quickly in warm water but burn more calories and therefore must find more food.

During warm years like these, coastal currents may carry southern species northward. The university research team led by Hopcroft found unusually large numbers of warmer water plankton species during their September 2014 surveys. Months of laboratory work analyzing plankton samples will be required know the full extent of this invasion.

The Seward Line continues to be the sentinel long-term monitoring site in the Gulf of Alaska, helping scientists understand the details of what is happening in the waters over the Alaskan shelf – and most importantly, its biological consequences. A consortium made up of the North Pacific Research Board, Alaska Ocean Observing System and the Exxon Valdez Oil Spill Trustee Council provide funding for the observation program.

This graphic shows ocean temperature anomalies across the Pacific in September of 2014. Red indicates high deviation from average temperatures.

Other examples of ocean monitoring technologies currently in use include profiling drifters that help monitor temperature and salinity in the deep ocean beyond the continental shelf; satellites that track the development of these warm conditions at the ocean’s surface; fixed buoys suited with instruments; and biological and chemical samples taken from ships. Data repositories, like the Alaska Ocean Observing System online at www.aoos.org, help aggregate and integrate the data into map form for easy interpretation by researchers and managers.

“Thanks to technological advances and the ability to coordinate monitoring devices at sea, scientists are better able to keep their fingers on the pulse of the ocean, and we’re able to share the information,” noted Molly McCammon, director of the Alaska Ocean Observing System. “New integration and visualization tools allow us to view the ocean in 4-D: two dimension space, depth and time,” she said.

More information on the Seward Line