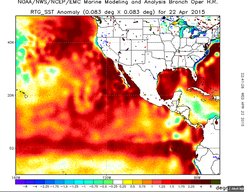 Six Alaskans will be joining more than 70 scientists and resource managers this week to share observations and data about unusual ocean weather and climate patterns observed throughout 2014 and early 2015 across the North Pacific basin.

The 2014-2015 Pacific Anomalies Science and Technology Workshop is being held at the Scripps Institute of Oceanography in La Jolla, California May 5-6 and is co-sponsored by the Integrated Ocean Observing System. Molly McCammon, Executive Director of the Alaska regional component of IOOS – the Alaska Ocean Observing System or AOOS – is organizing Alaska participation in the workshop.

“Scientists across Alaska have noted some unusual ocean and atmospheric conditions this past year,” McCammon said, “even more extreme than the climate change impacts we’ve seen over the past decade.”

Some of the unusual Alaska conditions may be related to areas of the North Pacific that have been as much as 5°C warmer than average, earning the nickname ‘the blob’, and appear to be impacting pelagic ecosystems, including fisheries.

This workshop is the first of two designed to understand the timing and scale of these anomalous oceanographic conditions in the North Pacific. Global and coastal ocean observing systems can then work jointly to deliver the information needed by stakeholders such as commercial fishermen and resource agency managers to understand the potential effects of these conditions on ocean resources. The first workshop will focus on research questions to understand the scope of these ocean changes, while the second, targeted for next winter, will focus on better understanding the potential weather, resource and economic impacts from the unusual ocean conditions, and on ways to better predict their occurrences.

Some of the Alaska conditions noted in the past year include:

The May 5-6 workshop will be webcast and will be available at:

This entry was posted in News, Uncategorized. Bookmark the permalink.