The goal of this statement of work is to assist in funding one year of operation and maintenance of four long-range high-frequency radar (HFR) sites on the northwest coast of Alaska located in Icy Cape, Wainwright, Point Barrow, and Cape Simpson that are operational during the open water season, July through mid-November (Figure 1).  Site run time and longevity is dependent upon additional partner funding.  Data collected will be available for real-time for operational applications including spill response, weather forecasting, search and rescue, etc. 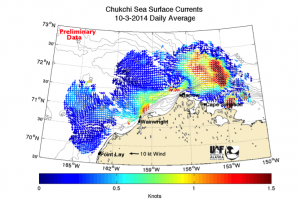 HFR measures surface currents by processing the Doppler spectrum from transmitted radar waves backscattered by ocean waves [Barrick et al., 1985]. At 30-minute intervals, each shore-based 5 MHz HFR collects one-dimensional current vectors up to 200 km in range, measuring the velocity of the current moving toward or away from the field site in a radial pattern. All radial measurements acquired in a three-hour window are then averaged to produce an hourly radial current file, which when combined with a second radial current file produces two-dimensional surface current vectors.

HFR sites have been installed and maintained on the northwest Arctic coast annually during ice-free seasons since 2009, recording real-time hourly surface currents.  Vectors are calculated at 6 km spatial resolution and represent the upper 1 – 2 m of the water column.  The coverage area varies with sea ice cover, calm sea conditions, and/or ionospheric interference.

Long-range CODAR HFR field sites will be installed and maintained on the northwest Alaska coast at Icy Cape, Wainwright, Point Barrow, and Cape Simpson from June/July through November 2016.  Data will be collected and disseminated in real-time.

Field sites will be installed by UAF technicians at the locations shown in Table 1.  Dependent on snow melt, initial installation of the Wainwright field site will take place in June 2016, while the Icy Cape, Point Barrow, and Cape Simpson installations will follow in July 2016.  The Wainwright field site is grid powered and includes two transmit antennas and a receive antenna, which are connected via cables to an electronics chassis.  The Icy Cape, Point Barrow, and Cape Simpson sites are similar although they have only one transmit and a receive antenna.  Additionally they are remotely powered with 4 small wind turbines, a solar array on the south face, and a battery bank.  Data from all sites are transmitted hourly via HughesNet high-speed satellite internet to the University of Alaska Fairbanks.