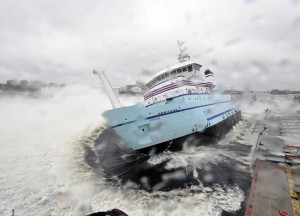 The Sikuliaq meets water for the first time in October in Marinette, Wisconsin. Photo from UAF.

Hundreds of people endured wind and rain Saturday, October 6, 2012, to attend the christening and launch ceremony for the 261-foot R/V Sikuliaq, the first built for the National Science Foundation in more than three decades. The crowd stood back and cheered as the Sikuliaq slid into the Menomonee River in Marinette Wis., sending an impressive spray of water over the dock.  Bob Elsner and Vera Alexander – the two in dark coats with no hard hats – helped initiate, advocate, and finally were able to christen this research vessel designed for Arctic science.

The R/V Sikuliaq, pronounced “see-KOO-lee-ack,” is owned by the National Science Foundation and will be operated by the University of Alaska Fairbanks School of Fisheries and Ocean Sciences. The ship was designed by Seattle-based Glosten Associates and is being built by Marinette Marine Corporation. Construction work will continue throughout the winter. UAF is slated to take control of the ship next summer and it is expected to arrive in its homeport of Seward, Alaska by January 2014.

Learn more about the Sikuliaq