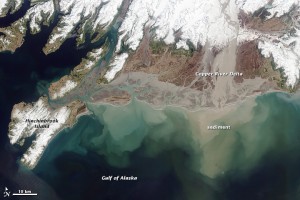 This satellite photo taken by NASA shows glacial sediment pouring into the Gulf of Alaska from the Copper River. This "glacial flour" is an important source of nutrients for organisms that support healthy salmon populations.

Named for the ore deposits found upstream, the Copper River drains an area of more than 24,000 square miles (62,000 square kilometers) and flows into the Gulf of Alaska. By volume of discharge, it is the tenth largest river in the United States. Its delta forms one of the largest and most productive wetlands on the Pacific Coast of North America.

On May 28, 2013, the Operational Land Imager on the Landsat 8 satellite captured this image of the Copper River Delta as spring thawing swelled it with water and glacial sediment. The Childs and Miles glaciers drain into the Copper River. As they slide down the mountains into the valleys, the glaciers grind on the bedrock below, creating what scientists refer to as “glacial flour.” That sediment is a good source of iron and nutrients for phytoplankton and marine plants, which in turn support abundant salmon runs.

The glacial flour that gives a milky tan and gray tint to the water is so fine that it remains suspended for a long time. After being carried downstream, some of this fine sediment slowly precipitates onto the large delta and extends it. The excess flows out to the ocean, suspended in fresh water that is less dense than seawater. When the water from the Copper River—as well as the nearby Miles River and Van Cleve Lake—reaches the ocean, it forms a layer (or plume) near the surface, on top of the salty seawater. The plume pulses back and forth offshore, depending on the tides. That is, when the tide falls, the fresh water surges into the ocean and the plume pushes away from the shore; when the tide rises, the plume gets pushed back toward the shore.

“The glaciers in this area are receding at some of the fastest rates in the world, which can have all kinds of impacts on the local ecosystems,” said Robert Campbell, research oceanographer at the Prince William Sound Science Center. Scientists are trying to figure out what exactly these impacts will be in the Copper River watershed.

The MODIS instrument on NASA’s Terra/Aqua satellite also captured an image of the Copper River during a dust storm in November 2012.