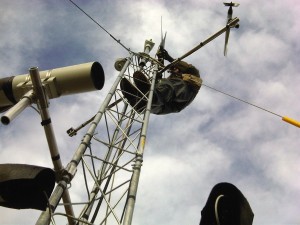 Heading to the Kodiak Harbor? Check the conditions at the new weather station before you go. The second node of the Alaska Harbor Observation Network (AHON) was deployed on the western tip of Gull Island in October. The station currently measures wind speed and direction, air temperature, relative humidity and solar radiation. The sensor feed can be found at the AOOS real-time sensor map, or the AHON Data Viewer website with updates every two minutes, along with hourly weather summaries.

In addition to the weather instruments, this site also provides three web cameras at Kodiak Harbor Channel, Pier Two and St. Herman Harbor’s South Entrance. The station is powered by renewable solar and wind energy. This spring, wave and tide measurements will be added to the Gull Island sensor station. Kodiak joins Seward in becoming the first nodes of a growing network of weather and ocean sensors at harbors in Alaska.

The Alaska Harbor Observation Network is a partnership between AOOS, the Alaska Sea Life Center, and UAA's School of Engineering.