A Sea Ice Atlas for Alaska 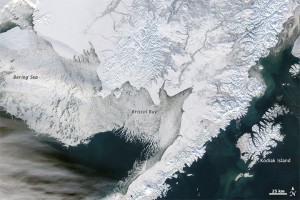 As the use of Alaska’s Arctic waters increases, so does the need for timely and detailed information about sea ice conditions. Using powerful software and historical databases extending back to the 1950s, AOOS is partnering with the Alaska Center for Climate Assessment and Policy (ACCAP) at the University of Alaska to produce a digital sea ice atlas for Alaska waters that will be publicly accessible through the AOOS website.

Who would use an ice atlas?

Changes in sea ice affect activities ranging from subsistence hunting and coastal travel to community safety and the use of ice as a platform by industry. There is a need for information about sea ice conditions at spatial-temporal resolutions higher than those from the National Weather Service. Alaska coastal communities from Dillingham to Nuiqsut, marine navigators, coastal managers, the US Army Corps of Engineers, the US Navy, and scientists—as well as those in the fishing, tourism, and offshore resource extraction industries—have expressed a need for an atlas that would provide such information.

To learn more, contact the Alaska Sea Ice Atlas Project at the University of Alaska Fairbanks.

This entry was posted in Arctic collaborations, Sea ice atlas. Bookmark the permalink.