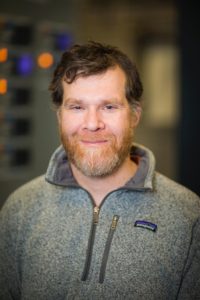 Jeremy has a BA in Physics and a Ph.D. in Oceanography. He has been studying the physical oceanography of the Beaufort Sea since 2001. He is currently a Research Assistant Professor at the UAF Institute of Northern Engineering. For this project, he and his team will be deploying bottom mounted moorings in Stefansson Sound to measure wave spectra, acoustic backscatter, velocity and near-bottom hydrography. In addition to the moorings, Kasper and his team are also responsible for a number of ship-based measurements in Foggy Island Bay including multibeam bathymetric measurements, hydrographic transects and acoustic Doppler current profiler measurements of water column velocity and acoustic backscatter.

Paul has a BE and a MS in Civil Engineering. Paul will be working with Nick to carry out the multibeam bathymetry survey. He will also be processing much of the new observations gathered during the course of the project.

Nick has a BS in Mechanical Engineering. Nick will be leading the assembly of the moorings and will be working along-side Jeremy and Paul to execute the field program.

We will be deploying oceanographic moorings within and around Foggy Island Bay in order to monitor waves, ocean currents, water level, temperature and salinity over the course of a two-year period. This information will inform our understanding of present day sediment transport within Foggy Island Bay. These observations will also be used for validating high fidelity numerical simulations of waves, storm surge and sediment transport in the region. At least one real-time wave buoy will be deployed in Fall 2018 and 2019 and a number of shipboard measurements will be made at the same time the oceanographic moorings are being deployed. In addition to these new observations of oceanographic conditions, we will be helping AOOS compile a database of existing observations to help identify gaps in our knowledge of waves and sediment in the region.