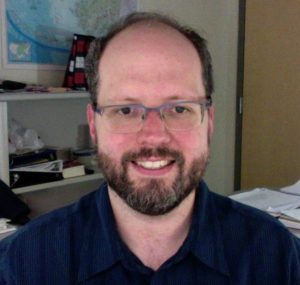 Peter is a Research Assistant Professor at the University of Alaska Fairbanks (UAF). International Arctic Research Center (IARC) where he studies the drivers of climate variability and change across the Alaska region. He has been with IARC since 2012. He completed his Ph.D./M.S. in Atmospheric Sciences at UAF in 2012/2007 and B.S. in Meteorology at Valparaiso University in 2005. With this project, Peter is providing downscaled climate hindcast and forecast data covering 1979-2100. These data include high resolution wind speed and direction information that will be used to help drive wave, storm surge and sediment transport models in Stefansson Sound. Additionally, he will lead the evaluation of the downscaled model and other data sets using historical observations in the region.

The hydrodynamic models used to simulate waves and sediment transport in our study require input information on wind speed, direction and ice cover to most accurately model the marine environment in Stefansson Sound. Historical observations over the ocean at the scale needed by the models are not available and therefore atmospheric models are used to help build “reanalysis” grids that combine satellite and station observations. Most of the atmospheric reanalysis data and climate model output are produced on a relatively coarse grid with nearly 100km by 100km grid boxes and finer scale (20km or less) data are needed to best capture the wind conditions in the region for the wave models to work best. The data are hence downscaled to a finer grid with the help of a regional weather forecasting model.

The downscaled hindcast (1979-2019) wind data will be evaluated against the available observations in the region to make sure that they are accurately capturing the wind fields seen in northern Alaska. Future projections (2020-2049) are provided by two different Global Climate Models (GCMs) that provide outlooks based on anticipated climate change and have been downscaled to the same grid as the reanalysis for consistency. Both GCMs follow the RCP8.5 scenario outlined by CMIP5. The projected data will be compared with the reanalysis to address potential model biases that often occur in GCM projections to calibrate the data for use in the wave modeling work.

The downscaled data used in this study were generated through an ongoing project funded by the USGS Alaska Climate Science Center. These data were dynamically downscaled using the Weather Research and Forecasting (WRF) model. Additional dynamical downscaling of historical reanalysis data will continue in support of this project. 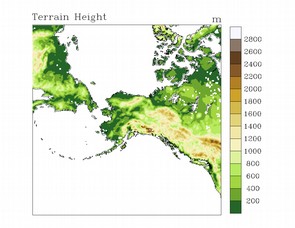 Full WRF downscaling domain and model topography (m). This study will focus on the Arctic Ocean and northern Alaska region of the domain.

WRF was used to downscale GCM and reanalysis data to 20km spatial and hourly resolution over the entire Alaska domain including adjacent oceans and areas of Canada and Russia. The ERA-Interim reanalysis was downscaled over 1979-2015 and will be continued to 2019 if updated data are available. The NCAR-CCSM4 and GFDL-CM3 RCP8.5 future projections were downscaled to 2100 and a hindcast period was downscaled for both GCMs for 1979-2005. WRF was forced at the lateral boundaries and initialized by the reanalysis/GCM input variables at 48-hour increments. These WRF “forecasts” include an additional 6-hour spin-up period to produce clouds and precipitation in the model and are constrained to the input data by a spectral nudging procedure. The 48-hr periods are then combined together to produce the final product. The downscaled WRF output include a full array of 3D and surface atmospheric variables but this study will focus on the near-surface (10m height) winds and sea ice variables. The hourly winds, sea level pressure and sea ice concentration variables over the Arctic Ocean will be used to help drive the wave model hindcast/forecasts.

The downscaled reanalysis data will be compared against other observed station and gridded data sets available in the region for validation. This is a necessary step since all reanalysis data sets and WRF model output contain biases. The downscaled reanalysis data will then be used as a baseline to assess the GCMs hindcasts/forecasts. This step will help to constrain the uncertainty of the GCM projections and calibrate the forecast data to be consistent with the reanalysis/observations. If significant calibration of the downscaled GCM wind variables are needed then either a delta method or quantile mapping correction approach will be considered.