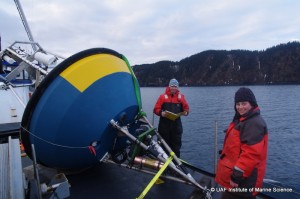 This spring, the first ocean acidification buoys were deployed in Alaska near Resurrection Bay and in the eastern Bering Sea.  They are the first in a series of buoys that will help scientists monitor ocean pH levels and better understand how oceans are being affected by climate change.  A third subsurface monitoring ocean acidification mooring is currently deployed in the Chukchi Sea and will be serviced this October.

The new buoys have a full package of oceanographic sensors which measure PC02, pH, salinity, temperature, dissolved oxygen, florescence, and chlorophyll A.  The Resurrection Bay buoy was deployed in April, and was christened by a pod of porpoises and two orcas that swam by almost immediately after the deployment.  The Bering Sea buoy was deployed on May 15.

Professor Dr. Jeremy Mathis, director of the Ocean Acidification Research Center (OARC) at UAF, is leading the project with assistance from Dr. Chris Sabine at NOAA’s Pacific Marine Environmental Lab in Seattle. “These buoys are really going to provide some new insights and understanding for ocean acidification in the Pacific-Arctic region,” said Mathis. “We know that these areas are going to experience a dramatic change in pH over the coming decades and, given the importance of the fisheries, we have to stay out in front of any potential disruptions that could be caused by rising carbon dioxide levels.”

Scientists predict that that the ocean is 25 percent more acidic today than it was 300 years ago, and is likely to increase.  This can be traced to increasing levels of atmosphere carbon dioxide due to fossil fuel combustion and land use change.  While 45% of the anthropogenic CO2 is held in the atmosphere, most of the rest is absorbed by the ocean. The resulting change in ocean chemistry reduces the pH of the sea water, which can have destructive impacts on calcified organisms such as shellfish, coral, and coccolithophores. Because calcified organisms are at the bottom of the food chain, the likelihood of impacting the entire food chain is high.

Better understanding this process and documenting the observed changes will help scientists and managers prepare Alaskans for potential impacts to fisheries and livelihoods. The buoys are recording hourly data which will soon be sent in near real-time to scientists at the University of Alaska Fairbanks and NOAA’s Pacific Marine Environmental Lab. It will also be available through the AOOS website.

The mooring program in Alaska has been developed through a consortium of agencies including the National Science Foundation, NOAA, the North Pacific Research Board, and AOOS, and is the centerpiece of the research program within the Ocean Acidification Research Center at UAF.  Ideally, the mooring program will continue to expand in Alaska and could provide an early warning system for ecosystems as they are potentially affected by changing environmental conditions such as ocean acidification.