AOOS Film Contest Highlight: We Live by the Water 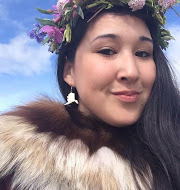 We Live by the Water was produced by Jackqui Lambert and entered in the 2014 AOOS Short Film Contest. The film attempts to capture the essential nature of water to all of our survival. “If we show the beauty of its uses, we can share why it’s important to keep it clean”.

Jacqui Lambert, 23, was born and raised in Kotzebue, AK. Beginning with Sivulliq Youth Media training and through freelance writing, she found a passion for multi-media communications. This video was written and filmed at the end of summer in her hometown and on the way to her family cabin on the Noatak River.