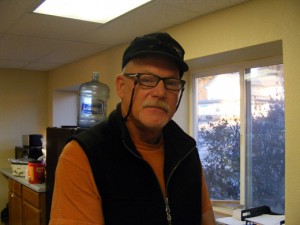 Capt. Pete Garay, the film’s producer, has spent the last 20 years of his career working in the remote waters of Western Alaska as a state-licensed marine pilot.

Renda’s Journey to Nome is a documentary taken aboard the Russian tanker Renda during her historic voyage to Nome in January of 2012. The film was produced by Peter Garay in cooperation with the members of Alaska Marine Pilots utilizing the film footage shot while serving as the pilot aboard the Renda.  The film It highlights the challenges of having to navigate 250 miles of pack ice to reach her destination. It also provides a glimpse into what the future may hold for commercial ship operators endeavoring to operate in winter conditions in the Arctic.

Capt. Pete Garay has spent the last 20 years of his career working in the remote waters of Western Alaska as a state-licensed marine pilot. He is married with three children and lives in Homer. His hobbies include fishing, gardening, and oil painting.

His favorite quote is said to be, “Dry again?” said the crab to the tide pool. Replied the tide pool, “So would you be, mister crab, if you had to satisfy the insatiable sea twice a day.”