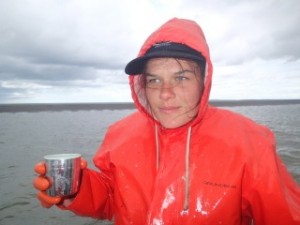 Maggie Bursch was runner-up in the 2014 AOOS Short Film Contest with her film Grateful for Salmon. The film is about Maggie’s first year running a Bristol Bay drift boat.  She was inspired to make the movie because so many good things in her life have come from the ocean and salmon in particular. “I’m paying my way through college from the ocean resources and I’m grateful”.

Maggie grew up set netting in Ugashik in Bristol Bay and has become increasingly involved in salmon fishing ever since. She is currently a junior at Colorado College and when not in school or on boats she loves to travel and get outdoors.