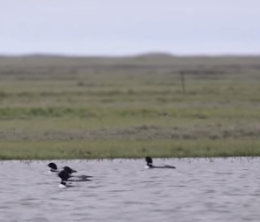 Last summer a team of youth videographers worked to produce the film Alaska’s Yellow Billed Loons as part of a youth videography initiative by the National Park Service and Alaska Geographic (Sam Tocktoo, Sam Bernitz, Andrew Kennedy, Dev Dharm Khalsa). To make the film, they traveled to the Seward Peninsula and the North Slope to document the efforts of scientists and researchers from many different agencies as they work to learn more about the status of these rare birds. They also traveled to a homestead on the Colville River Delta to gain the perspective of locals who have seen the changes over the years themselves.

Yellow-billed loons raise their young in northern Alaska each year.  Long time homesteaders Jim and Teena Helmerick have witnessed this annual event on the Colville River Delta every year for the last 50 years.  More recently, scientists with the National Park Service and U.S. Fish and Wildlife Service started monitoring the breeding population of yellow-billed loons across northern Alaska in order to identify factors affecting their low population size.  This information is part of a larger effort to provide Congress information for considering the yellow billed loon as threatened or endangered under the Endangered Species Act.