Exploring Currents in the Chukchi Sea 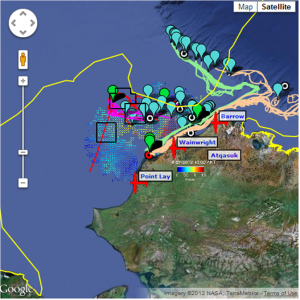 Above is a map of the study area, showing drifter locations overlaying HF radar surface currents.

A team from the University of Alaska Fairbanks is seeking to better understand and evaluate ocean circulation off the coast of northwest Alaska. Over the next few months, a variety of instruments will be used in the Chukchi and Western Beaufort to better understand water movement and exchange. The data on surface currents, and parameters such as temperature, salinity, fluorescence and water velocity, will also be used to develop oil spill trajectory models.

Get the Latest from the Field!

You can stay informed on the exciting science from the Arctic by following the Scientist's blog and twitter postings. Kim Martini, an oceanographer working on the Chukchi and Western Beaufort Circulation Study, will be writing daily from the field as the study takes place.

Where are those Drifters Today?

After releasing dozens of oceanographic drifters in the Chukchi Sea, the UAF is producing daily graphics and animations showing the tracks of their drifters. The drifters transmit position information while collecting important circulation data.

Kim Martini, an oceanographer at UAF, will be actively blogging this fall from the field.

This project is funded by the Bureau of Ocean Energy Management (BOEM).

This entry was posted in Arctic news, News. Bookmark the permalink.