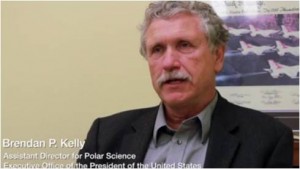 Brendan Kelly, the Assistant Director of Polar Science for the White House, speaks about the roundtable.

On June 14, the Office of Science & Technology Policy, in the Executive Office of the President, held an open roundtable discussion on the recently released National Strategy for the Arctic Region.  This brief high-level strategy document builds on policy recommendations developed through a number of recent studies focused on the US Arctic.

The discussion will inform an implementation plan which was originally slated to be released in the fall, but which may be delayed to ensure that adequate input is collected from across Alaska. Senators Begich and Murkowski both made remarks, and Fran Ulmer, the Chair of the US Arctic Research Commission, moderated a dialogue between the agency officials listed below, dozens of local officials, public and industry representatives, and citizens in the room and over the phone.

Additional comments on the strategy document and recommendations to the implementation plan may be e-mailed to: arctic@ostp.gov

Read the White House blog on the strategy.