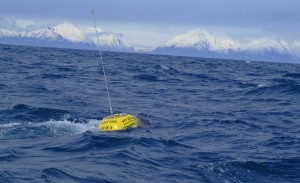 The Lower Cook Inlet wave buoy is back!  Thanks to the efforts of a number of devoted organizations and individuals, Homer area boaters can once again track sea state conditions before venturing out on the water. The buoy, owned by the Alaska Ocean Observing System, was first deployed in the spring of 2011, and has broken free from its tether twice.  On Sept 28th, the U.S. Fish & Wildlife Service research vessel M/V Tiĝlax redeployed the buoy slightly south and east from its previous mooring.

The new location (N 59 44.164, W 152 00.339) was selected to be out of the main ship traffic routes and wintertime ice flows while still reflecting wave conditions offshore.  The 400-pound yellow buoy transmits real-time information about wave height and direction, as well as sea surface temperature. It is also equipped with a light that flashes five times in a 20-second cycle (five flashes 2 seconds apart, followed by a 12-second pause).

Re-establishing the buoy exemplified the spirit of collaboration shown by the Homer community. Terry Thompson, director of the Kachemak Bay Research Reserve, has been instrumental in two retrievals and all three deployments of the buoy, as well as organizing logistics on the ground and on the water.  “There would be no buoy without Terry,” said Darcy Dugan, program manager at the AOOS.  “From cutting anchor chain by hand to towing the buoy back in the middle of the night, Terry has worked tirelessly to make sure the Homer community has access to this valuable resource.”

Crew members of the Tiglax prep the buoy on deck before deployment.

The U.S. Fish & Wildlife Service staff and Alaska Maritime National Wildlife Refuge director Steve Delehanty made a significant contribution by providing their 120-ft research vessel the Tiĝlax. Captain Billy Pepper and his six-member crew were able to execute the deployment perfectly despite rough conditions in the inlet.

Also playing a key role was Homer Harbormaster Bryan Hawkins, who provided harbor space to store the buoy between deployments, and Scripps Institute of Oceanography and the CDIP program who supplied mooring materials and guidance.

The boater community of Homer has shown tremendous support and appreciation for the buoy’s wave data. Many residents check the buoy’s real-time data on a daily basis, according to a user feedback survey circulated by AOOS over the summer.

The 120-ft M/V Tiĝlax (TEKH-lah – Aleut for “eagle”) was provided by the USFWS to deploy the buoy.

“It provides the only real sea conditions I can get before taking a boat 50 miles to Anchor Point to find out if its safe to go fishing,” wrote one captain.

“Operating a charter boat from Homer, this bouy is a critical component of my daily operation.   Hundreds of gallons of fuel and many hours have been saved by utilizing wave info from the buoy to decide whether to fish in the inlet or head south into the Gulf,” reported another.

The buoy is a key component of the AOOS initiative to improve ocean monitoring in Cook Inlet to meet the needs of the inlet’s many users, including commercial and recreational fishermen, shipping, resource managers, and the oil and gas industry and oil spill responders. For more information on the buoy, you can email AOOS.

Previous articles on the buoy: