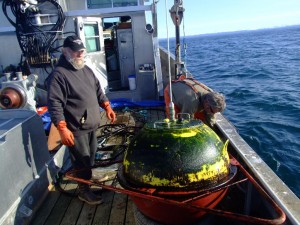 John Crosby, Captain of the Silver Hawk, provided his vessel to help retrieve the buoy

The wave buoy off the coast of Anchor Point sponsored by partners of Alaska Ocean Observing System took an unexpected swim in mid October, and is not currently producing data.  Around 1am on October 12th, the buoy broke free from its tether by what could have been a fishing net or other floating debris.  The cause is uncertain.

Fortunately, the buoy’s signal continued to transmit, allowing Terry Thompson, Manager of the Kachemak Bay Research Reserve, to track it down by boat. Thompson, along with the Captain and crew of the Homer based seiner Silver Hawk, found the buoy adrift several miles from its mooring around mid-day.

“Tracking a very small buoy gives you a sense of the tremendous currents and varying sea-state in lower Cook Inlet,” commented Thompson.

When found, the buoy was traveling North at almost 2.5 knots driven by the tides. Thompson noted that the sea conditions during the retrieval gave him more appreciation of the value of a wave buoy to mariners transiting or fishing in these challenging waters.

The buoy is currently residing in Homer until it can be redeployed. Once it returns to its location about 7 miles off Anchor Point, it will continue to provide real-time data through the three web portals below: