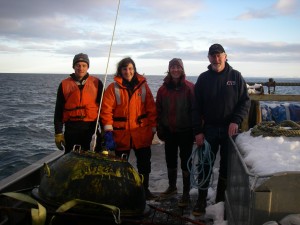 Tim Blackmon (KBRR), Kris Holderied (NOAA), Jasmine Maurer (KBRR) and Sid Wolford (boat captain) breathe a sigh of relief after successfully retrieving a wave buoy from the unpredictable waters of Cook Inlet. Everyone has a story. Time to tell yours!

Earlier this month, the AOOS lower Cook Inlet wave buoy broke free from its tether for the third time since it was first deployed in the spring of 2011. The marine community of Homer jumped into action and was able to successfully retrieve the buoy the next day.

The rescue crew included Tim Blackmon (Kachemak Bay Research Reserve), Kris Holderied (NOAA), Jasmine Maurer (KBRR) and Sid Wolford (boat captain).  The team left Homer Harbor on the F/V Silver Hawk (owned by John Crosbie) and used the satellite-transmitted buoy location from the Coastal Data Information Program,  real-time tide and current information, and good luck to drive right to the drifting buoy.  They lifted it onboard and then managed to complete an oceanography and plankton survey in Kachemak Bay on their way back to the harbor!

“We were lucky to catch the buoy while it was still in tidal loops to the west of Anchor Point, even though it was moving at up to 2 knots,” reported Kris Holderied of NOAA’s Kasitsna Bay Laboratory. “Having access to the buoy positions and uncharacteristically calm weather conditions made all the difference.”  The buoy’s “escape tracks” are displayed, left.

Back on land, a Homer harbor officer helped offload the buoy with the harbor’s crane, and the rescue team transported it to the USFWS Alaska Maritime National Wildlife Refuge warehouse.  Special thanks to Angie Doroff at KBRR for help coordinating the trailer and space logistics, harbormaster Bryan Hawkins, Brett Pickering of CDIP for help answering various questions along the way, and finally to Merry Maxwell and Jeff Williams at USFWS for help getting temporary storage space in their warehouse.  This rescue was a great success and remarkable show of team effort and support.

The Cook Inlet wave buoy is used by many area residents who check the buoy’s real-time data on a daily basis, according to a user feedback survey circulated by AOOS last summer. When operational, the 400-pound yellow buoy transmits real-time information about wave height and direction, as well as sea surface temperature to the Inlet’s many users, including commercial and recreational fishermen, shipping, resource managers, and the oil and gas industry and oil spill responders.

The buoy is currently residing in at the KBRR warehouse in Homer until it can be redeployed.

Previous articles on the buoy:

This entry was posted in Cook Inlet news, Featured content. Bookmark the permalink.