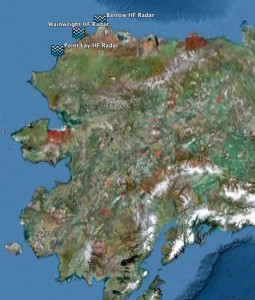 The only high-frequency (HF) radar stations currently operating in Alaska are located in the Chukchi Sea, funded by BOEM and the oil industry. The AOOS priority is to ensure continued operation of existing radars, and is contributing $156,000 this year to do so.

Why it useful to know about surface currents off Alaska’s coast?

All mariners must consider the currents created by tidal ebb and flood. When winds and waves are also factors, the speed of these currents can magnify waves to dangerous heights. HF radar is a powerful tool for measuring speed and direction of surface currents.

Ultimately, knowing more about nearshore ocean circulation in these regions and how currents transport anything drifting in the ocean—from benthic organisms to vessels in distress to oil spills—grows more important as the potential for increased vessel activity in the Arctic grows larger due to increased oil and gas exploration and a longer period of open water due to overall decline in sea ice.

How does HF radar work?

High Frequency (HF) radar is a shore- or ship-based measurement system used to quantify the speed and direction of surface ocean currents. One station transmits radio waves that travel several kilometers in all directions.

As each radio wave reflects off the ocean and returns to the receiver, the signal is shifted by a process known as the Doppler effect: the change in frequency of a wave for an observer (here, the receive antenna) moving relative to the source of the wave (here, the ocean). Knowing the amount of Doppler shift tells us how fast the currents are moving offshore. Learn more about the Doppler effect.

We need waves in order for the system to collect data. If there is no wind generating big waves, then we cannot measure the ocean currents, and there are only a few arrows on our map (left). Rougher waters (right) mean larger currents that we can measure.

Rachel Potter with the newly installed receive antenna at Barrow.

HF radar also helps us understand local ocean current phenomena that are hard to detect by other methods because these ocean features are relatively small.

The project is a partnership that combines expertise and personnel from the University of Alaska Fairbanks (UAF) with funding from the US Bureau of Ocean Energy Management, ConocoPhillips, and Shell Oil. Project data will be available in near real time through the AOOS data portal, and through UAF.

Visit Chukchi Sea Surface Currents to see photos from station deployments, a short animation of 12 hours of sea surface currents from 2011, and more.

This entry was posted in Arctic collaborations, HF Radar. Bookmark the permalink.