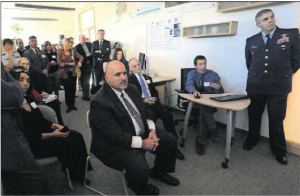 The AOOS data portal was a key component in prototype decision support tools displayed at the official launching October 21 of the US Department of Homeland Security’s (DHS) Arctic Domain Awareness Center (ADAC) at the University of Alaska Anchorage. The tools were developed by the AOOS data team at Axiom Data Science using the AOOS Ocean Data Explorer, funded over the past decade through NOAA’s Integrated Ocean Observing System program as Alaska’s regional Data Assembly Center for ocean and coastal data.

The ADAC is a DHS Center of Excellence with multiple university, industry and community partners supporting research and development to improve emergency response in the Arctic. Axiom developed the draft intelligence system as a prototype situational awareness picture for use by DHS and especially the Coast Guard. It uses the AOOS data visualization and storage portal and harnesses the data streams acquired by AOOS through our network of partnerships with academia, industry, community stakeholders and government agencies.