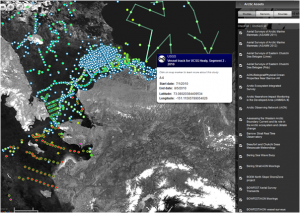 The research assets map shows the locations of planned and existing instruments and monitoring sites across the state with a focus on the Arctic.

A new version of the Arctic Research Assets Map has been released! The map has expanded to include assets in western Alaska and Canada, and has new capabilities to help users personalize their view. Explore the new features of the assets map, give us feedback with the feedback link, or submit your instruments.

More About the Map

Scientific research activity in Alaska’s Arctic has increased substantially in the last few years. AOOS has responded to a need for a visual inventory of the locations and types of oceanographic information being collected by creating a web-based, interactive map that allows users to display Arctic research information of interest. It is also a first step towards providing greater access to the variety of data collected by numerous parties, including industry.

The Research Asset Map was developed and is maintained by the AOOS Data Team. Thanks to NOAA, the University of Alaska, the University of Washington, the US Bureau of Ocean Energy Management, the National Science Foundation, Conoco Phillips, Shell Oil, and many others for contributing information about their instruments.

This entry was posted in Arctic news, Featured content. Bookmark the permalink.