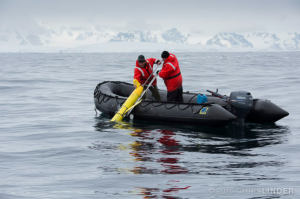 Researchers deploy a glider into cold Antarctic water. The AOOS glider is one of four gliders traversing the Antarctic water column and transmitting data in near-real time.

Now a bi-polar instrument, the AOOS underwater glider is spending the winter in Antarctica.  Thanks to the efforts and connections of UAF scientists, the glider is among four U.S. gliders helping measure salinity, currents and photosynthetic activity in the Antarctic water column to help identify water convergence zones.

Hank Statscewich, a physical oceanographer at UAF, helped facilitate the transfer of the instrument and is part of the team studying the Antarctic ecosystem.  “The lessons learned from operating the AOOS glider in the Arctic Ocean is now being utilized in an NSF sponsored project on the Western Antarctic Peninsula,” he said.  “The glider is helping connect ocean physics to primary productivity all the way up to penguin foraging.”

The gliders will spend several weeks at a time transiting Antarctic waters near the Palmer Research Station, surfacing every few hours to telemeter data to scientists.  “We think convergence zones are concentrating the food web [phytoplankton and krill],” said Dr. Matt Oliver of the University of Delaware. “So these gliders are going to go fly through those zones and find out if that’s true.”

Conducting research in Antarctica is no easy task.  To find stories and pictures about day to day research efforts, visit http://coseenow.net/converge/.

The AOOS glider will return to Alaska in the summer for more Arctic research in the Chukchi Sea.