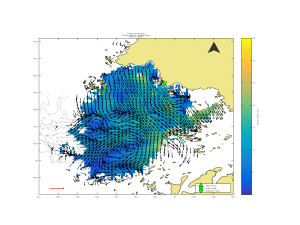 This map shows currents in the region picked up by HR radar. The glider data will be combined with the HF radar data to help answer questions about convergence zones.

An underwater autonomous glider supported by AOOS and operated by UAF is on its 30th consecutive days of flying through Antarctic waters.  The AOOS glider is one of five gliders measuring salinity, currents and photosynthetic activity in the Antarctic water column near the Palmer Research Station to help identify water convergence zones.  So far the glider has flown 480km (slightly less than the the road distance from Anchorage to Fairbanks).

The transect patrolled by the AOOS glider is about 24km, and it takes about one day to complete. Nearby, a glider from Rutgers is swimming in repeat lines perpendicular to the AOOS glider, and a University of Delaware glider is acting as a virtual mooring – performing a 100m watch circle and doing repeat dives in one location. The data from these gliders will be combined with HF Radar data, ocean surveys and mooring data to provide a vivid picture of the ocean dynamics in Antarctic waters.

More on the gliders in Antarctica, how they work, and what they’re finding (the AOOS glider is referred to as UAF191 in this article)

This map shows a series of gliders running transects near the Palmer Research Station in Antarctica. The AOOS glider is labeled “UAF”, as it’s Antarctic journey has been facilitated by Hank Statscewich and Peter Winsor of UAF.