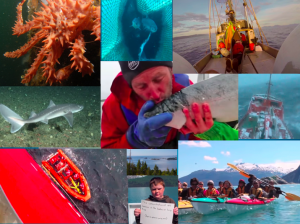 Film topics ranged from focusing on species such as loons or sea otters, to conducting research in Alaska waters, to the realities of running a fishing boat in Bristol Bay, to the impacts of climate change through the eyes of students in Barrow.

AOOS staff and contest judges were extremely impressed by the 32 films (including 8 youth films) submitted to the AOOS 10th Anniversary Short Film Contest.  Entries were 10 minutes or less and could address any aspect of Alaska’s marine environment, issues, or inhabitants.

Prizes will be awarded at the AOOS 10th Anniversary Celebration at the Anchorage Museum on Nov 19th, where four of the top films will be screened.  We will be highlighting each of the entries separately on the AOOS website during 2015. Also keep an eye out for an evening of contest films at the Alaska Marine Science Symposium in January.