On the evening on Nov 19, AOOS celebrated its 10th Anniversary with 100 partners and supporters at the Anchorage Museum.  The program was highlighted by a keynote speech by GulfWatch Alaska scientist Craig Matkin on orca whale predation, and four of the winning films from the AOOS Short Film Contest. 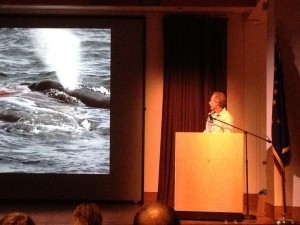 Whale researcher Craig Matkin shows footage from an orca attack on grey whales. He will be giving a longer talk on this topic at the Alaska Zoo on April 8th.

AOOS Executive Director, Molly McCammon, provided some reflections on where the program has come in the last 10 years.  “The early founders of AOOS had a common vision that by working together, we could increase ocean observations in Alaska – in essence, create a national Weather Service for the ocean.  We knew it could not be done without partnerships,” she said.

Thanks to the many people who have lent their ideas, guidance, instruments and funding over the past 10 years.

The short films from the AOOS film contest will be highlighted individually on the AOOS homepage over the next year.  To whet your appetite, below is the grand prize film titled Siblings at Sea by Charlie Ess. Stay tuned for more on Charlie and his film. 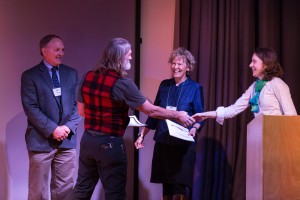