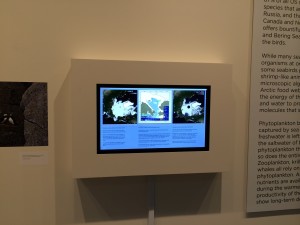 The Anchorage Museum’s exhibit On Ice is now on view until September 20th and features AOOS submitted elements including an animation of changing sea ice coverage generated from the AOOS website. Also featured is Lauren Bell’s video Under the Arctic Ice and Peter Garay’s video Renda Journey to Nome, two of the 2014 AOOS Film Contest entries.

On Ice explores the historical role that sea ice has played in the Arctic, presented through the perspectives of science, business, government and individuals whose lives and livelihoods are inextricably tied to its dynamic conditions.