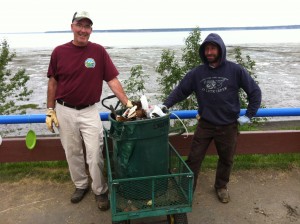 AOOS Board member Paul Gill and Data Manager Rob Bochenek stand in front of a pile of trash picked off the beach by volunteers on June 23rd.

After a chilly September clean-up in 2012, this year’s event was moved to June and community members enjoyed sunny skies while removing over 500 pounds of trash near Lyn Ary Park and Pt. Woronzof.  The most common items were broken glass, cigarette butts, and bottles.  Some unusual items included the springs from a box spring, a burned computer, and piping believed to be from the 1964 earthquake.

Thanks to the many volunteers, including children, who helped make the clean-up a success.  The event was part of an international effort with over 500,000 people in 97 countries spending time to remove trash from the worlds’ coasts.  Learn more about International Coastal Clean-up Day.

This entry was posted in Cook Inlet news, News, Uncategorized. Bookmark the permalink.