Workshop Debrief: Alaskans Discuss the Do’s and Don’ts of Community Based Monitoring 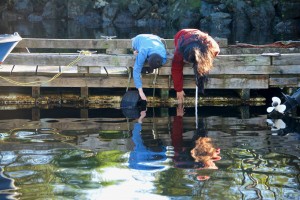 Ketchikan High School students, Hana Oshima and Micah Briola look for invasive tunicates under a dock near the village of Saxman. Photo by Deborah Mercy

How do you sustain a community-based monitoring program? “Be fearless,” said Julia Parrish. The University of Washington professor and founder of the Coastal Observation And Seabird Survey Team, a volunteer seabird monitoring program, was an invited speaker at the workshop “Community Based Monitoring: Observing Alaska’s Coasts and Oceans.” Parrish’s success at building COASST—from 12 volunteers in 1998 to 2,700 today—provided an excellent model at the workshop. She also hinted: design for the long term, get bigger because funders like to support growth, foster two-way communication between scientists and communities, and consider crowd-source funding.

More than 100 people attended the workshop—coordinators of monitoring programs, scientists, educators, and agency leaders—eager to discuss the best ways to design and run community-based monitoring programs. They represented a broad range of projects, from volunteer citizen science to networks of paid observers in the Arctic who report on local environmental change. What all the efforts have in common are collaboration between scientists or agencies that need environmental data, and community members who collect and often help make sense of the data based on community concerns.

The workshop audience heard several speakers, including Henry Huntington, Pew Charitable Trusts officer; Mike Brubaker, coordinator of the Local Environmental Observer Network; and Heidi McCann, Exchange for Local Observation and Knowledge in the Arctic (ELOKA); as well as panels focusing on successful programs. Then they divided into small groups to continue the conversation around each other’s needs and experiences.

From the North Slope to Ketchikan, Alaskans want to gather their own data about environmental changes such as water pollution, invasive species, marine debris, and marine mammal distribution and berry crops. The workshop featured collaborations unique to Alaska, in which scientists and Alaska Native traditional knowledge holders pool their insights to determine what to observe and how to interpret the significance of environmental changes to subsistence activities.

Describing ELOKA, Heidi McCann said, “the idea was to get this research out to the public so that other researchers wouldn’t be toppling over each other going into communities and basically doing the same thing.” Scientists involved in community-based projects described their needs for solid scientific data and the impact that scientifically defensible information could have on environmental decision-making and policy.

The Alaska Center for Ocean Sciences Education Excellence provided travel funding to 50 participants from the National Science Foundation COSEE grant, bringing people from throughout Alaska and from Russia and Canada. The travel support provided an unprecedented opportunity for community leaders, program and agency heads, and everyone in between to sit together and exchange ideas.

Marilyn Sigman, Alaska Sea Grant marine education specialist, and a group who attended the workshop are writing a handbook that will summarize best practices for community-based monitoring. The writers’ goal is that the handbook will be useful to anyone involved in community-based monitoring in Alaska, including potential project funders. The book will be published in late 2014.