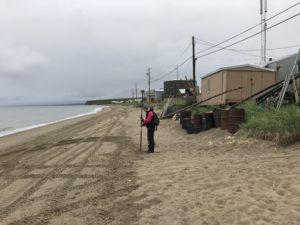 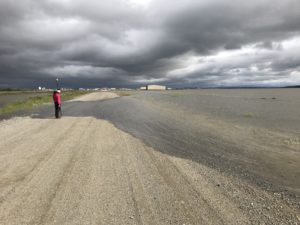 In July 2018, the Alaska Division of Geological & Geophysical Surveys Coastal Hazards Program conducted coastal surveys at Kotzebue and Deering, Alaska to inform the elevation data used to create color-indexed flood communication maps. While surveying in Kotzebue, the program staff observed a summer storm surge which occurred over the course of July 17-18. Minor flooding associated with the storm occurred in some of the more low-lying areas of the region, including Air Force Road, a public access road in Kotzebue. Two sections of Air Force Road flooded into ponds adjacent to a secondary airstrip used by small airplanes. While in Deering, high water lines were still visible during the coastal survey, and documented by program staff. During the event, the Deering IRA placed sandbags along the road to their airport to mitigate flooding. Photos and survey points were collected at the margins of the flooding at both communities. Color-indexed community maps for Kotzebue and Deering will be made available for the fall 2018 storm season. These maps will help weather forecasters and emergency managers to communicate potential and resulting flooded areas in advance of and after storm events in Kotzebue Sound communities.