February is not a normal time of year for coastal storms to be flooding western Alaska. With another year of record low sea ice extents in the Bering Sea (NSIDC, 2019), however, the coast remains vulnerable to low-pressure systems moving across the ocean. On February 12, 2019, much of Norton Sound was ice free (see below) and a storm surge sent floodwaters into communities along the coastline. The Alaska Ocean Observing Systems has been working to improve water level data collection along the western coast of Alaska, so when the event occurred, the monitoring systems in-place were able to capture measurements of the event. Monitoring systems range in complexity from a Global Navigation Satellite System sensor at St. Michael to NOAA tide gauges at Nome and Unalakleet, even community monitoring at Kotlik and Golovin where impacts were photographed and submitted to the Alaska Water Level Watch Facebook page https://facebook.com/AlaskaWaterLevelWatch/. These data will be used to communicate community-wide flood impacts to emergency managers and help better predict future storms.

Investigations into other communities impacted by the storms are still ongoing at the Alaska Division of Geological & Geophysical Surveys. Information can be sent to Jacquelyn.overbeck@alaska.gov or submitted to the Alaska Water Level Watch Facebook page, https://facebook.com/AlaskaWaterLevelWatch/. 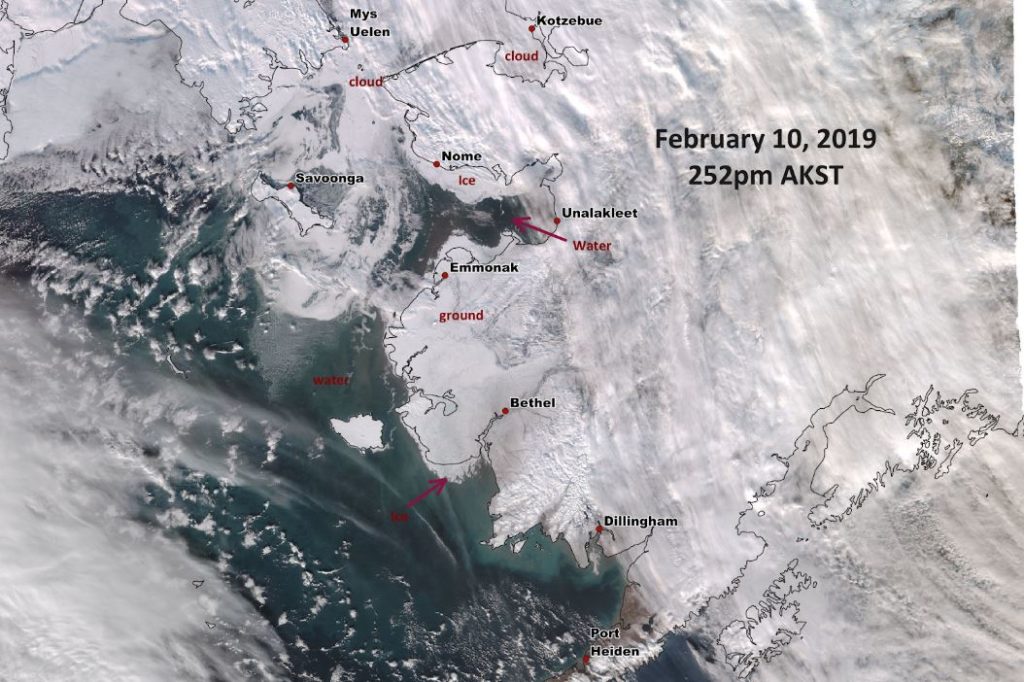 Suomi NPP Satellite image of open-ocean and sea ice along western Alaska in advance of the February 12, 2019 storm, courtesy of UAF/GINA and prepared by Rick Thoman, ACCAP

Wave monitoring camera captured the event at Unalakleet. Showing a massive ice berm on the beach transported by waves and a snow berm placed by local individuals to mitigate flooding, created by the U.S. Geological Survey Pacific Coastal and Marine Science Center.