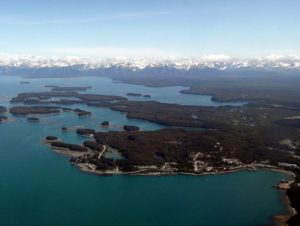 Esther and Jennifer covered the basics of OA, common terminology and what it means (omega, pH, etc), current research in Alaska, and the projected and observed impacts. Yakutat started taking weekly discrete water samples at two local beaches for analysis on the Sitka Tribe of Alaska’s Burke-o-Lator in June of this year, so the presentation also included Yakutat’s summer data. The audience was small, but exceptionally engaged, and included a decades-long Forest Service employee and a  former Fish and Game manager.

While not all the audience members were familiar with the expected impacts of OA, all were familiar with its cause and that it represented a significant threat to marine resources. Audience members were extremely concerned about the health of Yakutat’s salmon runs, as this summer represented the worst runs of all species that anyone could remember, and about the potential for OA and the blob to combine to damage fish runs.

Yakutat Tlingit Tribe expects to add a third OA sampling site in the next couple of months and to begin monitoring several local salmon streams. Ideally, scientists will have more answers for Yakutat citizens concerned about their salmon health by this time next year.