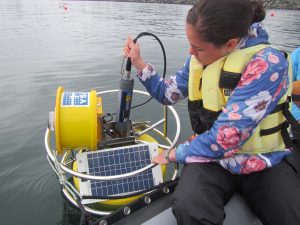 The community of Sitka, led by the Sitka Tribe and the Sitka Sound Science Center (SSSC), is making a concerted effort to monitor ocean acidification in their backyard.

“As a local Tribal government, we’re most interested in how ocean acidification will manifest itself in the local ecosystem and how it will affect subsistence resources here,” said Esther Kennedy, the Sitka Tribe Environmental Specialist. “Initially, we will be collecting baseline near-shore data for Sitka Sound. We will be looking to see whether OA trends in the open ocean are muted or amplified here.” Among the questions the Tribe and the SSSC are hoping to answer is whether they can expect the local ecosystem to be more resilient to OA given the lower initial pH of nearshore waters.

New and upcoming monitoring efforts around Sitka include the following:

There is increasing interest from tribes across the state to get involved in ocean acidification monitoring and education. If you would like to be part of a new working group connecting tribes and OA, please contact OA Network coordinator Darcy Dugan, dugan@aoos.org.