September wraps up an active month of OA monitoring across Alaska 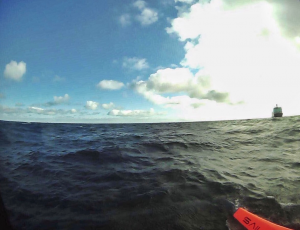 This photo, taken in September 2017, shows a calibration activity where the USCGC Healy was able to rendezvous with the saildrones in Arctic waters.

Chukchi Sea: The US Coast Guard cutter Healy studied OA in the Chukchi Sea and sampled within the Distributed Biological Observatory (DBO). OARC co-Director Jeremy Mathis and NOAA researcher/OARC PI Jessica Cross were aboard to collect and analyze hundreds of seawater samples. Their work was part of the NOAA Arctic Northern Chukchi Integrated Study research cruise, which focused on tracking ecosystem responses to rapid environmental changes 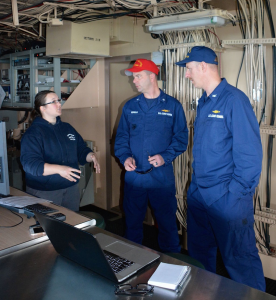 Hanna Shoal, an ecological hotspot, received particular attention during the cruise. In this area, high primary production, slower circulation patterns, and focused deposition help create a thriving food web, all the way up to walrus, whales, and human communities. However, recent changes such as ice losses, ocean acidification, and rising air and water temperatures might be changing the delicate balance in this area.

In addition to the ship-based work, Cross and colleague Calvin Mordy also deployed two autonomous surface vehicles (ASVs), called Saildrones, to the Chukchi Sea to help monitor changing surface conditions in the area. One of the Saildrones was dispatched far north to monitor melting sea ice, reaching all the way to 75N. This is the furthest north than an unescorted ASV has ever traveled!

Beaufort Sea: Along Alaska’s northeast coast, OA sensors on moorings in the Beaufort Sea were turned around (replaced) as part of the Marine Arctic Ecosystems Study (MARES). This study area, near the Alaska-Canada border, will help understand linkages between oceanic processes and freshwater discharge from the Mackenzie River. (More on MARES.) 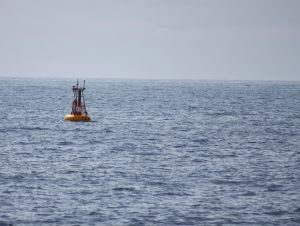 The M2 mooring in the Bering Sea, affectionately known as “Peggy”, has been collecting OA data since 2013. Photo credit: Natalie Monacci.

Bering Sea: The NOAA Ship Oscar Dyson successfully recovered and redeployed moorings in the Bering Sea. OARC Deputy Director Natalie Monacci has been working to keep these monitoring sites operational since 2013. This fall’s preliminary data show that the surface of the Bering Sea is much cooler than the previous few years. Colder water has the ability to hold more gas, such as carbon dioxide, which can increase OA intensity. (View mooring data). 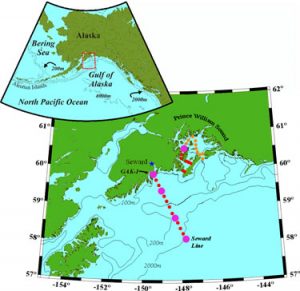 The Seward Line extends from the mouth of Resurrection Bay to the shelf break and constitutes the longest time-series sampling effort in Alaska.

Gulf of Alaska: The fall Seward Line cruise was successful again this year. PI Jessica Cross is excited to begin looking at the data from this 10 year time series! OARC has made OA observations along this transect, which extends from Resurrection Bay to the shelf break, and at sites in western Prince William Sound from 2008 to 2017. Stay tuned for updates on the first decadal OA time series in Alaska. (More on the Seward Line)

Note: These projects represent work conducted by OARC and NOAA and do not constitute a comprehensive view of all fieldwork going on in Alaska.  For more on monitoring, please visit the “Monitoring” drop-down menu above.