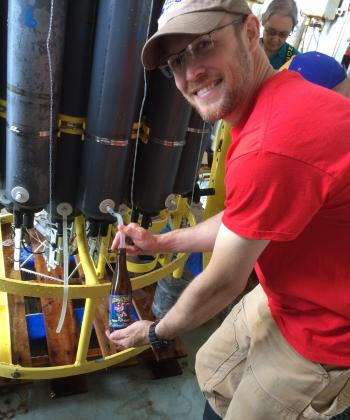 Wiley Evans manages the Hakai Institute’s Ocean Acidification Program, which operates OA monitoring systems in both Alaska and British Columbia. Formerly a member of UAF’s Ocean Acidification Research Center as a post-doc and research scientist, he now maintains the Burke-o-Lator sites in Seward, Ketchikan and Sitka, and is part of a partnership with the Alaska Marine Highway System to install OA monitoring systems on the ferry. Wiley also serves on the Alaska OA Network’s Executive Committee.

What drew you to the study of ocean acidification in Alaska?

My background comprises a focus on sea-air CO2 exchange in coastal settings, and during my PhD I did some work in southeast Alaska. After finishing my degree, I got lucky and landed a postdoc at UAF’s Ocean Acidification Research Center where I began thinking beyond gas exchange to manifestations of OA.

Tell us more about your role – what element do you work on and where?

Part of my training involved building a strong technical toolset for diagnosing and troubleshooting CO2 systems. Over the years, I’ve worked with many different types of CO2 systems, and this has become a central aspect of my work. I’ve since trained my own group to have a similar skill set, and now we maintain all the Burke-o-Lator sites in Alaska, as well as the new Alaska Marine Highway Ferry CO2 system, in partnership with the host organizations and our colleagues. It’s a team effort and we’re grateful to be a part of it.

What are some of the most notable things you’ve learned about OA in Alaska or in general?
In general, the complexity of the processes that shape manifestations of OA in coastal settings continues to intrigue me, and I suspect that will be the case for the rest of my career. With regard to Alaska, there are many aspects of its enormous coastline that captivate my attention, but the influence of glacial melt on CO2 chemistry, specifically with the tendency to drive decoupling from the standard relationships we expect, is an important characteristic that makes the nearshore glaciated regions of this state very unique.

What do you see as the biggest challenges in your work?
Time. It takes an incredible amount of time and effort to be successful at answering the questions we’re addressing. Long hours plus time away and often at sea in not the greatest of conditions. Yet anyone who does this work, does so because the love it and they’re driven by a host of reasons to succeed. So finding the balance of being highly productive and yet not being consumed by your work can, at times, be a significant challenge. Work/life balance is key and maintaining that is vital for your sanity and the sanity those around you.

What is a really memorable moment from your time in the field or in the lab?
Recently we were coordinating two ships to sample the same hydrographic station simultaneously; the NOAA Ship Ronald H. Brown and Hakai Institute’s R/V Explorer. The weather was perfect, everyone was very happy as it was the last station of a long and successful field campaign, and right before we started deploying the CTDs, two Canadian Forces F-18 fighter jets dropped down on the horizon and buzzed between both vessels right above the height of the satellite dishes on the Ron Brown. I was on deck and all I could do was raise my arms and yell out a battle cry as the jets shot over. It was a pretty awesome finish to the cruise. Oh, and of course the cruise data were incredible too.