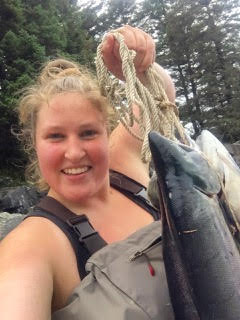 You’re understand you’re looking at the response of razor clams to ocean acidification.  Could you tell us more about the study?

Razor clams are found all along Alaska’s southern coast and are a hugely important species in Alaska as they sustain a commercial fishery, support subsistence communities and are the most popular shellfish for recreational harvest in Cook Inlet. In 2015 the recreational fishery on the East side of Cook Inlet was closed due to record low population counts, and the cause is largely unknown. I am really interested in finding out if increasing acidity in coastal Alaskan waters is an obstacle that these organisms are facing. We are running an experiment at the Alutiiq Pride Shellfish Hatchery in Seward to look at the impact of low pH water on larval razor clams. I’ll be looking at physiological and morphological indicators of OA stress.

What have you learned so far?

In sifting through the literature it was evident that there are very few studies published on the impact of variable pH on calcifying organisms. In looking at sensor data from Dr. Kelley’s work in Kachemak Bay, and other sensors placed along Alaska’s southern coast, it was obvious that the pH levels in these coastal regions exhibit massive amounts of variability. I have learned a lot about patterns and the extreme conditions we are already seeing in razor clam habitat. Because of this, we have included a variable treatment in our experiment to attempt to mimic similar conditions to what these organisms may actually be experiencing.

Have there been any surprises?

I think the largest surprise I have experienced with this project was in forming time series of the pH data I found from coastal sensors. The variation we’re seeing in these coastal environments often follows extremely recognizable and obvious patterns. I assumed I would see some kind of pattern, but it was surprising to me just how repetitious and obvious these patterns were.

Based on their biology, would you expect razor clams to be more or less susceptible to OA than other shellfish?  Why?

This is a difficult question to answer because there is a lack of information regarding the biology of razor clams. However, it is irrefutable that the population on the East coast of Cook Inlet has declined and this must be attributed to something. So, it is possible that they are more susceptible to the impacts of OA than other Alaskan shellfish, and we just don’t know.

Are there any special challenges working with shellfish in the lab environment?

Razor clams, and other shellfish, are used to living in sediment, not the artificial environment we hold them in. They’re used to spawning under environmental cues, so trying to manipulate these conditions to prevent spawning until the precise moment, but still keep the clams happy is quite the balancing act. Temperature of the water, and the amount of food we’re supplying has to be monitored very closely.

I sometimes joke that conducting OA experiments is a bit like being a science pioneer, but in a sense that is true. There is only one (on-going) study about the impacts of OA on bivalves in Alaska, and we are still building a coastal monitoring system to cover the whole state. This makes my position really exciting. I am constantly learning new things, but I also get to participate, in a small way, in the contribution to the knowledge base about OA in Alaska. As a fourth-generation Alaskan, it is also really exciting to be able to help answer questions about a species so important to Alaskans, and help educate local communities on the impacts OA can have on the coastal ecosystems we all rely on.

Any particular memorable moments in the lab or in the field?

When I got to Seward, Jeff Hetrick, the hatchery director, informed me that he wasn’t sure it was possible to spawn razor clams. Dr. Kelley and I had spent a year planning this project and it was all based on being able to get larvae, so I was incredibly worried we would be unsuccessful and the whole project would fall apart. The first attempt at spawning was unsuccessful. Just for fun, I tried to spawn again one afternoon, I put gametes into a bucket and put it in a corner and kind of forgot about it. The next morning Dr. Kelley approached my while I was taking water chemistry samples and told me we had swimming trochophores. I couldn’t believe it! They hatched on July 4th, 2018 so it felt like the town of Seward was shooting off fireworks just for the larvae. We have since spawned twice more and both times have been successful. I have even been able to document the stages of development and form a general timeline, which had never been done before, so it’s incredibly exciting.