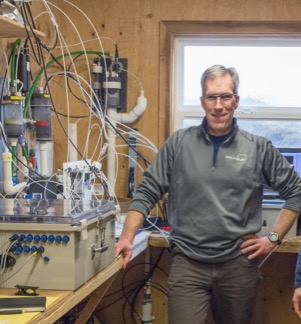 Burke Hales is a professor of ocean ecology and biogeochemistry at Oregon State University, and the inventor of the “Burke-o-Lator” a system that has revolutionized shore-based OA monitoring. Burke is a member of the Alaska OA Network and has been involved in getting all three of Alaska’s Burke-o-Lators up and running.

Q: Tell us about what element of OA you work on, and how you got interested in this topic.

BH: I have studied ocean carbon cycling, from the perspective of carbonate chemistry, since I started grad school in 1988.  That project focused on how calcium carbonate dissolution in deep ocean sediments was impacted by CO2 produced by respiration, and made use of an autonomous system that measured pH and oxygen concentration over millimeter scales on the seafloor.  From there, I moved on to studying surface-ocean and ocean-margin CO2 cycling, where I devised systems for high-speed autonomous ocean sampling and chemical analysis.  Ocean acidification is just one facet of ocean carbon cycling, and in some ways, I have been studying that for nearly 30 years.  What really helped me make the transition from general research on ocean carbon cycling to focused OA work was the development of an experimental method that would allow the normally co-varying facets of the CO2 system (pCO2, pH, Ω) to be decoupled from each other, in conjunction with colleagues who were able to carry out very careful manipulations with larval mussels and oysters.  The result of those experiments, namely that these organisms were sensitive exclusively to Ω at modern-day-proximal conditions, is what established our contributions to this field.

Q: How about the Burke-o-Lator… what does it do and what’s the story behind its invention?

BH: The Burke-o-Lator is a highly automated system that measures the CO2 partial pressure (pCO2) and total dissolved inorganic carbon (TCO2) of flowing or discrete-bottle samples.  What makes it unique is this combination of these two measurable parameters, and the capability to make both measurements on the same water sample.  Carbonate chemistry is never fully constrained unless you make measurements of any two of alkalinity, TCO2, pCO2, or pH, and alkalinity and pH can be challenging in the highly variable coastal environment.  The system can make research-grade measurements of these parameters at a cost of about half of other single-parameter systems.  During the continuous analysis of flowing seawater streams, the pCO2 measurement relies on a prominently visible water-gas ‘equilibrator’, which consists of a separation unit that has a bubbling, foaming mixture of water and air bubbles.  This equilibrator is what prompted Mark Wiegardt, Netarts Bay oysterman and Whiskey Creek Shellfish Hatchery co-owner, to coin the name ‘Burke-o-Lator’.  I wasn’t even aware of this name for months after Mark started using it, and only heard about the name from some thirdhand. However, it is a great name and OSU and my side company, Dakunalytics, have since trademarked it.

In my prior research, I had already had the need to develop high-speed, research-grade measurement systems for pCO2 and TCO2 that I could interface with the fast-flowing sample streams coming from the Pumping SeaSoar and SuperSucker systems.  The development of the Burke-o-Lator was a merging of those two systems, and it was prompted by the need to have an automated Ω-determining system that we could install at the Whiskey Creek Shellfish Hatchery in response to the Pacific Northwest Seedstock Crisis.  We needed a system that could deal with the complicated and turbid waters of the coastal environment without extensive need for hands-on servicing and maintenance.  We built the prototype out of spare parts in my lab at OSU, and then the first full system was produced for Craig Carlson, a professor at UC Santa Barbara, before we put the second complete system in place at WCSH in 2011.  The WCSH system has been completely rebuilt twice since then, as we refine and improve its operation.

Q: Where are the Burke-o-Lators in Alaska and why do we need them?

BH: Currently, there are Burke-o-Lator systems at the Alutiiq Pride Shellfish Hatchery in Seward, Oceans Alaska in Ketchikan, and at the Sitka Tribes Alaska Environmental Research Laboratory in Sitka.  Dakunalytics is producing another for installation at the Alaska Fisheries Science Center facility in Kodiak in September of this year. Alaska coastal waters are cold and fresh in comparison to the average open ocean, which means that CO2 is more soluble in those waters.  This means that the impact on the water’s carbonate chemistry is greater as atmospheric CO2 rises.  Alaskan waters are already naturally close to the Ω thresholds that we identified in our experimental work.  In addition, coastal waters are highly variable, and this means that there will rapid transitions between strongly favorable and strongly unfavorable conditions, that would be hard to detect without this measurement technology.

Q: Can you tell us about a memorable time in the lab or in the field?

BH: When I was just starting graduate school, I went on a research cruise between Cape Cod and Bermuda.  A problem was that it coincided with Hurricane Hugo, and we chose to set sail instead of risking being trapped in port as the storm approached.  The instrument I was working on at the time relied on small electrodes that had to be filled with special solutions using hypodermic syringes and needles.  During one particularly rough period, I was braced against the lab bench and struggling to keep this heavy instrument from falling off its stand as the ship rolled away behind me.  Of course, I had one of those syringes on the lab bench, and it came sliding along the bench-rail straight at my ‘nether’ region.  I distinctly remember thinking about my horrible options:  bail out and probably destroy the instrument the cruise depended on, fall over backwards with the instrument crashing down on me, and/or being involuntarily vaccinated with pH-electrode filling solution.  As bad as that was, the senior graduate student in the lab thought it was the most hilarious thing he had ever seen, and started yelling stuff like “How much do you love oceanography, son???”  At that moment, I didn’t love it one bit, but the weather flattened out in a few days, and we managed to get a really nice dataset and I’ve been able to laugh about that moment for at least the last few years.

Q: Any advice for someone entering the OA world as a young scientist?

BH: Be quantitative, and produce objectively clear results.  OA is a fairly simple problem:  The chemistry is well known, and the possible effects are numerous.  But it takes more careful and detailed analysis than many appreciate, and it is really hard to adequately determine the difference between natural variability and the effects of rising CO2. Working with living organisms is very challenging.  And, finally, OA is inherently a multiple-stressor problem, where multiple factors change in response to rising CO2. Understanding the mechanisms of response can be a complicated process.  All of these challenges require solid backgrounds in mathematics and the physical sciences.