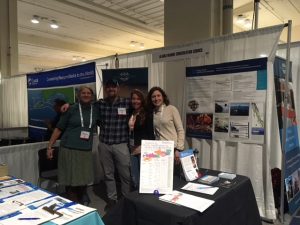 Last week, the Alaska OA Network was at the Pacific Marine Expo in Seattle – an annual event in Seattle that draws thousands of fishermen and fishing industry members from across Alaska and the Pacific Northwest.  The network had a booth and also helped organize a panel on ocean acidification and salmon.

“Do fishermen care about ocean acidification?  The answer seems to be an overwhelming yes,” said Alaska OA Network director, Darcy Dugan, who had conversations with more than 50 members of the fishing industry over the course of two days.  “Fishermen are looking for information.  They want to know what is happening now, what can they expect in the future, and how might this affect their livelihoods”.

The speaker panel, which was moderated by United Fishermen of Alaska, highlighted NOAA oceanographer Dr. Jessica Cross, salmon fisherman Amy Grondin, and UW marine biologist Dr. Chase Williams.  The audience was packed, and many stayed around to ask additional questions.

Jessica Cross explained how Alaska waters are already close to harmful levels of acidity for marine species due to its cold, productive water and that it only takes a small amount of human generated CO2 to cross the threshold.  Amy Grondin underscored the appreciation that fishermen have for the marine environment that supports the fish they’re harvesting, and the need for fishermen to stay aware of and be involved in the ocean acidification discussion.  Chase Williams walked the audience through new results of the response of coho salmon to acidified waters.  His research involved subjecting juvenile coho to water conditions expected in 2025-2050 and 2050-2100, and observing their response to predators.  The study found that with increasing acidity, salmon were less likely to act appropriately in the presence of a predator due to the influence of the lower pH on their sense of smell.

The Alaska OA Network will continue to reach out and work with the fishing community. If you know an audience of fishermen that would benefit from an ocean acidification Q&A session or additional resources, please let us know.