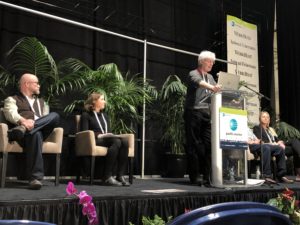 Andre Punt of the University of Washington speaks about crab population dynamics under ocean acidification scenarios at the Pacific Marine Expo in Seattle in November.

For the second year, ocean acidification was on the stage at the Pacific Marine Expo, an event in Seattle that draws around 8,000 fishermen from across the Pacific Northwest.  The Alaska Ocean Acidification Network facilitated a panel that focused on crab in the Bering Sea, starting with what we know about crab response in the lab and how that information can inform projections for future crab populations and consequent impacts to fisheries.

“Fishermen are on the front lines of this issue, and are looking for information,” said Darcy Dugan, director of the Alaska Ocean Acidification Network.  “The biggest questions we hear are ‘ how is this going to affect me?’ and ‘when do I need to worry?’ ”

After an intro to ocean acidification and some background on the network by Dugan, the panel kicked off with a presentation by Bob Foy, the director of the NOAA Alaska Fisheries Science Center (AFSC), on how crab species are responding in the lab to elevated acidity. Andre Punt, a researcher at University of Washington then used Bob’s results to show scenarios of Bering Sea crab populations projected into the future.  This was followed by Michael Dalton, an economist with NOAA, on what this may mean for fishing revenue and the economy. Finally, Kirstin Holsman, a NOAA AFSC scientist, discussed other large-scale changes in ocean conditions due to climate change and how ocean acidification fits in.

An audience of 70 people listened to the presentations and asked questions.  The Alaska Ocean Acidification Network also had a booth at the expo and talked to fishermen about ocean acidification over several days.