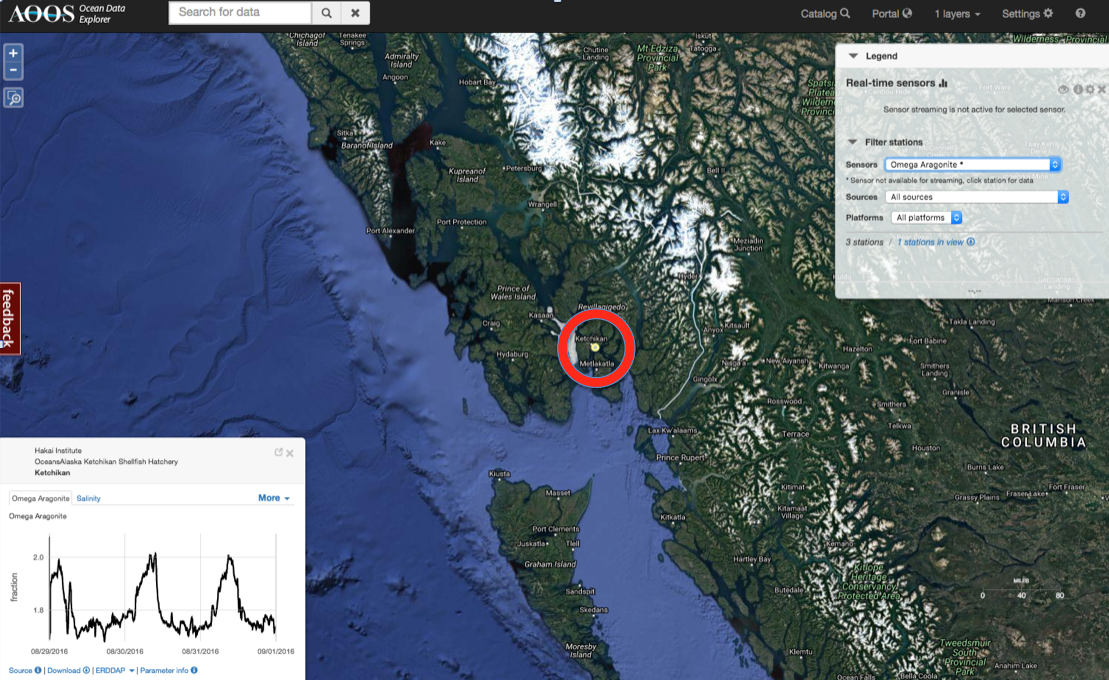 The Burke-O-Lator is located at the OceansAlaska shellfish hatchery in Ketchikan. 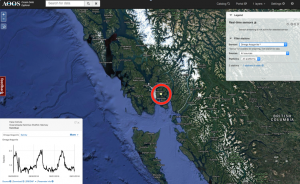 The Burke-O-Lator is located at the OceansAlaska shellfish hatchery in Ketchikan. This screenshot is  from the AOOS data portal, one of two locations to find the data.

On Aug 29, the OceansAlaska shellfish hatchery in Ketchikan became the second hatchery in the state to monitor for ocean acidification.  The instrument, known as a “Burke-O-Lator” after its developer Burke Hales of Oregon State University, tracks aragonite saturation, or the suitability of ocean water to form calcium carbonates that shellfish use to form their shells.  Shellfish have been identified as a species particularly vulnerable to ocean acidification because corrosive water can impede the shell building process and cause energetic stress for the organism.  While Alaska’s shellfish hatcheries are not yet showing the effects of ocean acidification, hatcheries in the Pacific Northwest first began to notice shellfish larvae dying about a decade go.  Between 2005 and 2009, shellfish seed production plummeted by 80%, resulting in a well publicized effort to better understand the cause and implications, and monitor the waters around hatcheries (Seattle Times series).

The Burke-O-Lator in Ketchikan is the second instrument of its kind to be installed in Alaska, joining the Alutiiq Pride Shellfish Hatchery in Seward, which started in 2014.  Both systems are run by Wiley Evans of the Hakai Institute, in partnership with the hatcheries and with financial support from the Alaska Ocean Observing System (AOOS), the Northwest Associations of Networked Ocean Observing Systems (NANOOS), and the UAF Ocean Acidification Research Center. 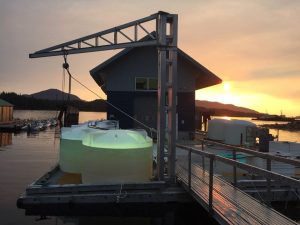 OceansAlaska is the only site in the state that produces oyster seeds and makes them available to other growers.

“The Burke-o-Lator is a mechanical multi-tasker—a masterful combination of technologies,” said Evans. “The system measures the partial pressure of carbon dioxide (pCO2) and the dissolved inorganic carbon content, and can simultaneously analyze these variables in both a constantly-flowing seawater stream and from bottled samples.  This means it can monitor CO2 chemistry near-continuously at the hatchery while also processing water collected from other locations in the region.”

Seven other Burke-O-Lator systems dot the Pacific Northwest. Data from these systems can be found in the Pacific Region Ocean Acidification Data Portal (direct station link), which brings together data streams from ocean acidification networks across the region, or in the AOOS data portal (click on the dot over Saxman). Another Alaska Burke-O-Lator will be installed in Sitka next spring, in partnership with the Sitka Tribe.