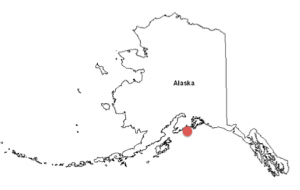 Location: Mouth of Resurrection Bay near Seward (59.91, -149.35). Note: GAKOA is a short distance from the nearby GAK1 mooring; these are two separate moorings
Timeline: 2011-present, measurements every 180 minutes 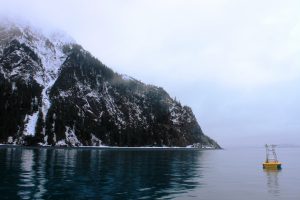 Description: Interannual variations in temperature and salinity on the northern Gulf of Alaska (GAK) shelf reflect environmental changes that affect this marine ecosystem. Quantifying and understanding this variability requires long time series such as the 32-year record at hydrographic station GAK 1 near Seward. The GAK 1 time series appear to be a reliable proxy for the freshwater content, and the geostrophic, baroclinic component of the mass and freshwater transport in the Alaska Coastal Current along the Cape Fairfield Line. Variability in the marine environment, as reflected in ocean temperatures and salinities, and the shelf circulation, need to be quantified to understand the structure of, and changes in, the northern Gulf of Alaska marine ecosystem. The GAKOA project continues the GAK time series with a surface mooring containing a MAPCO2 system and a surface seawater pH sensor. By measuring pH in addition to pCO2, we are able to more accurately and precisely study the changes associated with ocean acidification. View the data. 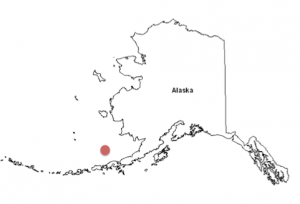 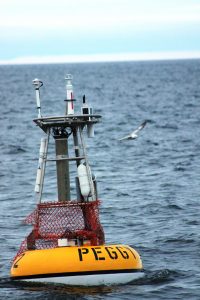 The M2 OA buoy, known is “Peggy” is located in the southeast Bering Sea

Description: Interannual variations in the partial pressure in CO2 (pCO2) and pH on the southeastern Bering Sea shelf reflect environmental changes that affect this marine ecosystem. It is critical to quantifying and understanding this variability, particularly in a region where a vulnerable fishery exists. The M2 OA mooring will measure the variability in the region, as reflected in ocean temperatures and salinities, and the shelf circulation, to quantify and understand the structure of, and changes in, the southeastern Bering Sea marine ecosystem. By measuring pCO2 and pH, we are able to more accurately and precisely study the changes associated with ocean acidification. View the data. 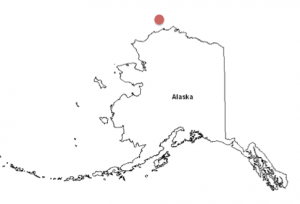 Timeline: OA sensors are deployed for the first time in summer 2016 and will be re-deployed annually through at least 2019. The first deployment of the observatory (without OA sensors) occurred in September 2014.

Instrumentation: The Observatory consists of three closely located moorings. We are using a Contros HydroC and Sea-Bird SeapHOx to measure pCO2, pH, oxygen, temperature and salinity at 35 m depth. See the full list of other biological, physical and chemical instrumentation. 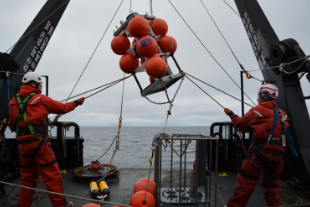 Description: Integrating pCO2 and pH measurements with the other measured parameters will aid in the understanding of the controlling forces that mediate ocean acidification and carbon fluxes in the Chukchi Sea throughout the year, including the under sampled and poorly understood seasons when sea ice inhibits ship-based samples. Along with ocean acidification, the Arctic is undergoing unprecedented climate induced transformation that include warming temperatures, extensive sea-ice losses, increases in storm frequency/magnitude, enhanced wind-driven mixing, and increasing inputs of terrestrial organic matter. Our ecosystem observatory will help us capture these changes and their effects on the ecosystem.

Funding Source:This project is supported by a multi-institutional consortium that includes the Alaska Ocean Observing System, the North Pacific Research Board, Olgoonik-Fairweather, Université Laval, the University of Washington and the University of Alaska Fairbanks. 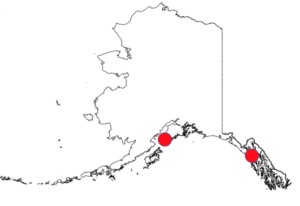 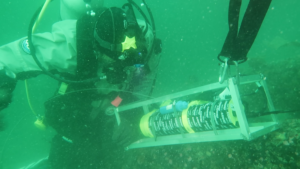 Description: Nearshore ecosystems help to protect the coastline and provide important habitat for marine animals. Because these ecosystems are highly dynamic and complex, it has been challenging to accurately monitor changes in ocean chemistry in coastal waters, especially in Alaska. The goal of these sensor networks is to characterize baseline high-frequency pH dynamics in Kachemak Bay (Homer, AK) and Lynn Canal (Juneau, AK). These communities are vital coastal areas for commercial, recreational and substance activities. With few baseline ocean pH records in place, it is difficult to determine the human-caused and natural influences on ocean pH variability. Measuring OA is increasingly important to aid our understanding of how marine ecosystems will respond to global ocean change.

Instrumentation:  OA sensors are deployed on two moorings in a network that observes across-shelf structure of many variables such as temperature, salinity, chlorophyll, oxygen, carbon dioxide (Sunburst Sensors SAMI CO2), and current speed and direction.

Description: These moorings are part of the Marine Arctic Ecosystems Study (MARES).  This study is observing the Arctic marine ecosystem along the Beaufort Sea Shelf from Barrow, AK to the Mackenzie River delta in the Yukon Territory, Canada.  Understanding the relationships of the physical, biological, chemical, and human systems near the Mackenzie River in the Arctic Region will help understand linkages between oceanic processes and river discharge.  The moored OA sensors are one part of a large sampling program including ships, drones, satellites, and models. 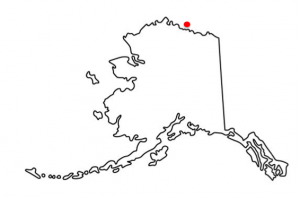 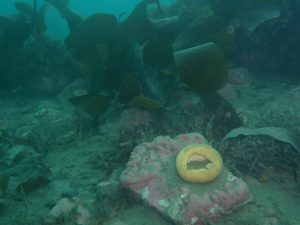 This picture shows the benthic environment in Stefansson Sound where the mooring is deployed. Photo: Ken Dunton

Description: Seasonal and spatial variations in temperature and salinity within the Boulder Patch kelp community in Stefansson Sound reflect environmental changes that affect this marine ecosystem. Quantifying and understanding this variability requires continuous measurements of these parameters at multiple sites.  Data from these sensors will allow us to understand the variation in seawater pH in relation to freshwater run-off from the Sagavanirktok River. Variability in the marine environment, as reflected in ocean temperatures, salinities, and pH need to be quantified to understand the structure of, and changes in, the Boulder Patch marine ecosystem.  By measuring pH in addition to salinity and temperature, we are able to more accurately and precisely study the changes associated with the rich benthic community of this Arctic kelp community. 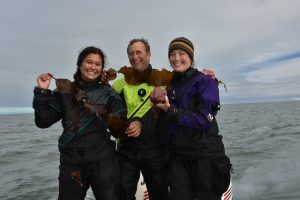