Meet Jessica Cross, a scientist at NOAA’s Pacific Environmental Lab, who works at the cutting edge of research on ocean acidification.  Jessica took some time to answer questions about her work, her life as a scientist, and some memorable moments in her career. 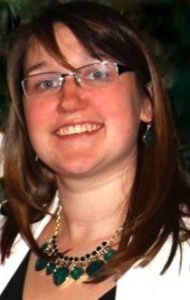 Jessica Cross is a research scientist at NOAA PMEL in Seattle.

Q: What element of ocean acidification do you work on, and where?

A: I work with the Ocean Acidification Research Center, which operates along the whole Alaskan coast. My specialty is in working with new technology and autonomous systems that help collect different kinds of data. When different tools are used together, we can better look at complex questions and build a better understanding of how OA works in Alaska.

Q: What findings have you been most surprised about?

A: There are really intense OA hotspots in Alaska, like just south of St. Lawrence Island. Here, the natural carbon system is extremely vulnerable to OA, and even the little bit of new carbon from OA that has already absorbed there has been enough to turn the waters corrosive, and we’ve seen evidence that carbonate minerals may already be dissolving. That’s fast, and intense, and I think it surprised everyone. But, just east of there, south of Nunivak Island, models suggest that the system may be a very resilient, and may not turn corrosive for a long time. We’re still investigating that, but it will be surprising too if the model is right!

Q: What drew you to the topic of OA?

A: When I was in college, I studied straight chemistry. Most of my friends were on their way to medical school. I never really liked biology or anatomy, but growing up in Florida, I had always been around environmental science, and I loved the ocean. I worked an internship at the University of Miami where I met some other ocean acidification researchers, and I was hooked from day 1. I love knowing that the work I do is part of an important process that is actively happening, and that by studying this process I have the opportunity to help real people in real communities. I get to make a difference, and that is my favorite part of my job.

Q: What’s the most exciting part about your job?

A: The community that I work with has been studying research in Alaska for almost ten years now, which is really cool. What this means is that we have good, long time series data in the Gulf of Alaska, and we are starting to be able to identify trends. The other thing is that I have watched as the community has developed new technologies to more efficiently and cost-effectively measure OA, and now that’s my primary job– to find and use new tools to do my job better. It’s really exciting to me to see how far we have come, and how fast we are moving into the future!

Q: What is a really memorable moment from the field or in the lab?

A: One of the BEST things about being at sea is usually that there are all kinds of scientists on board– chemists, biologists, physicists… and people of all levels, new scientist and seasoned experts. This helps everyone learn together, as everyone has a slightly different perspective, and together, we study the whole ecosystem, from physics to plankton to whales. I love it. But… old salts do tend to play tricks on new sailors.

One year, one a big multidisciplinary cruise, there was had an ecologist and bird watcher on board that wasn’t as familiar with other kinds Alaskan wildlife. At dinner one day, the ecologist pointed out my brand new UAF sweatshirt, which had the Nanook mascot on the front. “What is a Nanook, anyway?” he asked.

Actually, I had wondered the same thing when I first moved to Alaska. A Senior Researcher had told me, quite confidently, that a Nanook was a mini polar bear. This, of course, is the opposite of true: Nanooks are supposed to be Kings of the Polar Bears. But I was new, and I didn’t get the joke. So, months later, here I am repeating this to an ecologist– that a Nanook is a mini polar bear!

I was so serious that the ecologist almost believed me– after all, I believed it myself. But he knew enough to look it up, and of course ‘caught’ me trying to play this ‘prank’ on him. I never admitted that the prank had been on me. The ecologist was so impressed with my (accidental) poker face that we played this Mini Polar Bear Nanook prank together on a couple more people by the end of the cruise. All in good fun though, and everyone learned about Nanooks in the end!

I have many, many more days of sea time at this point. I have crossed three major ocean lines of demarcation. I have even lead my own expeditions, in three countries, and two hemispheres. But I don’t think I will ever call myself an ‘Old Salt’ — not until the day that I get that Senior Researcher back. Hey, by the way… have you ever heard of Mini Mammoths?