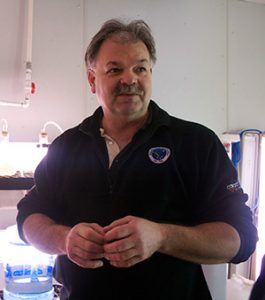 How did you get involved in ocean acidification?
We started looking at ocean acidification as part of the shellfish hatchery crisis that affected the oyster industry on the west coast. I had attended meetings of the Pacific Coast Shellfish Growers Association and had informal discussions with hatchery managers and operators and they all expressed concerns about OA. Unfortunately, we had no way of knowing if we were being impacted. We were contacted by Wiley Evans from PMEL and asked if we would be interested in participating with maintaining a PCO2 monitor and we said yes.

Explain a little about your day-to-day work at the hatchery. What species are growing and what you are monitoring?
The hatchery is like a farm where you need coverage 7 days a week. We feed live algae, which has to be cared for everyday and we need to maintain all of the systems. We presently raise red king crab, abalone, cockles, butter clam sea cucumbers, little neck clams, oysters and geoducks. We also have an OA Lab were we constantly monitor our sea water intake and we also process discrete water samples from our partners at the villages in Prince William Sound and Kachemak Bay.

What are some of the biggest challenges of studying ocean acidification with respect to shellfish?
The OA field is relatively new and we are just now beginning to understand the effect on the different shellfish and the vulnerability at different life stages. We have a here pronged approach with our OA monitoring. We do a constant monitoring of our saltwater intake, we have a discrete sampling program with ten partners in South-central Alaska and we have set up a dosing lab to study the effect of different aragonite saturation levels on juvenile shellfish.

Hatcheries in the Pacific Northwest have had a lot of trouble with ocean acidification.  So far Alaska is not experiencing those affects? What’s different?
The hatcheries in the Pacific Northwest have learned to farm around OA by dosing with lime or soda ash. We will be installing similar systems at Alutiiq Pride since we have episodes where the water chemistry, specifically aragonite saturation, gets really low. We are now catching up with the technologies that have been used elsewhere and applying them to our unique situation here.

Where do you see the shellfish industry in Alaska in 20 years?
The shellfish industry has been slow to develop but the past few years has seen impressive growth. I think we’ll see new and emerging species being cultured and I think we’ll see a lot of enhancement of public beaches. Our shellfish populations are at a critically low level with almost no recruitment of hardshell clams in Southcentral Alaska for over a decade. We are utilizing the shellfish garden and sanctuary concept to bring back some localized populations near native villages in the Chugach Region. These sanctuaries protect juveniles and adults to help jump start populations. They also serve as “living laboratories” to try to determine what the bottleneck may be for these species.

What is a really memorable moment from your career at the hatchery or working with shellfish in Alaska?
I think my most memorable moment is when we successfully raised a significant number of red king crabs and finally got to do some out-stocking experiments. King crab culture is not very well understood and we developed techniques to go from experimental small scale attempts to production and economically viable levels. We had to overcome numerous obstacles including diet requirements, handling protocols, shipping culminating in 30% survival from larvae to out-stocking.